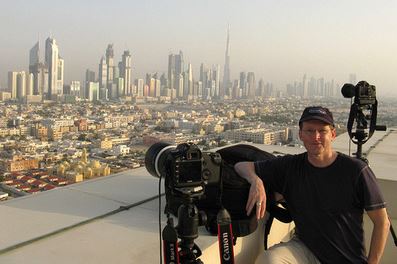 For more than 30 years Geoff Tompkinson has traveled the world as a photographer and timelapse video producer.

Geoff produced the first ever digitally produced commercial timelapse clips, before DSLR’s were available, using a homemade intervalometer with one of the early Nikon Coolpix cameras. He went on to become the world’s first fulltime professional digital timelapse shooter. It was many years before others joined him.

His time-lapse and real-time footage regularly appears on television all over the world as well as in major Hollywood movies.

His work has attracted many awards over the years including a World Press Photo award in 1985.

In 2014 he started developing his HyperZoom™ technique. This has now reached a level where it enables the production of seamless virtual timelapse flights joining real-time, time-lapse, hyperlapse and every other filming technique into a single journey with no visible cuts between the locations.

When not traveling and shooting with his wife Liz, they live on the shores of Lake Hallstatt in Upper Austria.