Our good freinds Denis and Rose were visiting from UK so we decided to take them to this amazing event in the Gosau Valley just a few km from where we live. Whilst there I shot a load of images and decided to put together a little ‘Bucket List’ feature for MCN. 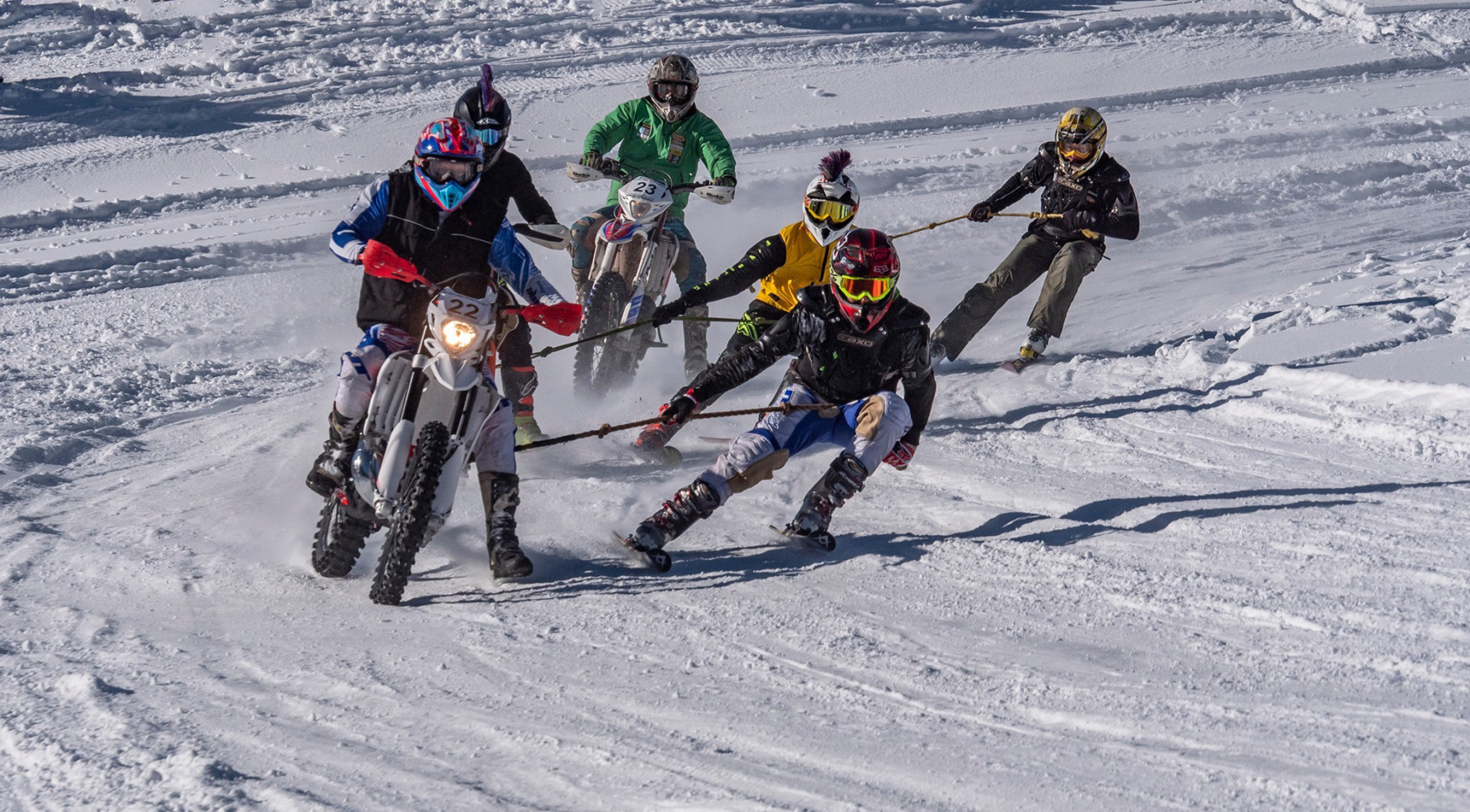 You can hear the roar interspersed with snippets of excited tannoy commentary bouncing off the Dachstein mountains all along the valley.
Its Skijöring day in Gosau! One of the craziest motorcycle spectacles you’ll likely ever see. In this normally quiet ski resort in Upper Austria riders and skiers have assembled from all over Austria and further afield to throw themselves – often quite literally – into the snow on
dirt bikes whilst towing intrepid skiers hanging onto knotted ropes. What could possibly go wrong?

Skijöring originated in Norway 100’s of years ago when the Sami people harnessed reindeer to tow them across vast snowy expanses. By 1912 Skijöring behind horses had become popular in Switzerland and France and by 1928 it appeared in the Winter Olympic Games at St. Moritz. Since then it has been known to use dogs, snowmobiles and cars as the towing power. But it’s only when you use motorbikes and add in a speedway circuit and a kamikaze vibe that it really becomes exciting.

The Holzknecht Skijöring Gosau is a very popular event. You need to arrive very early in the morning if you want to park your car anywhere nearby – we parked at Zecafe a mile or so away and had an excellent breakfast before walking alongside the river to get there. After
picking our way through an ocean of parked cars we reached the staging area with masses of dirt bikes and riders awaiting their spin in the arena. 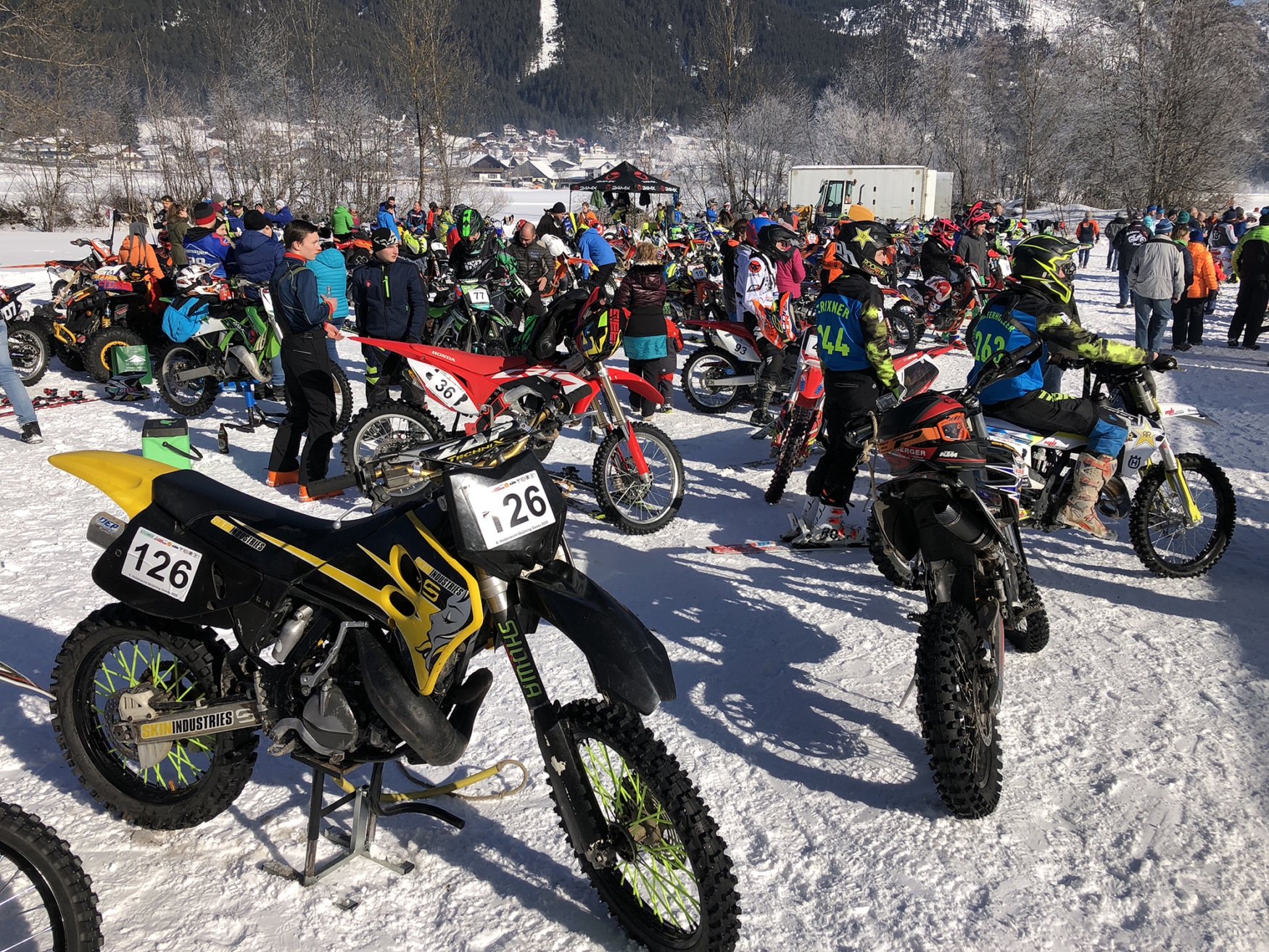 The circuit itself is roped off for a modicum of public safety and decked with sponsor banners. Each heat consists of six rider/skier pairs fighting it out for three laps of the oval circuit, if they last that long, and the event is broken down into multiple categories based on
engine size and age of bike. Riders and skiers are limited to 100 pairs and ranged in age from 7 to 58 this year. The course was assembled specifically for this event a few days earlier in a vacant field and has recently been re-flattened by a piste machine. It starts off smooth enough but rapidly decays to a mogul studded obstacle course as the day progresses and the classes move through
engine sizes to the final Open Motocross Category. A heat is about to start. The Six riders assemble shoulder to shoulder in front of a
taught rope stretched as a start line marker across the track in front of them. The skiers shuffle into position behind and grab their knotted rope tow lines. 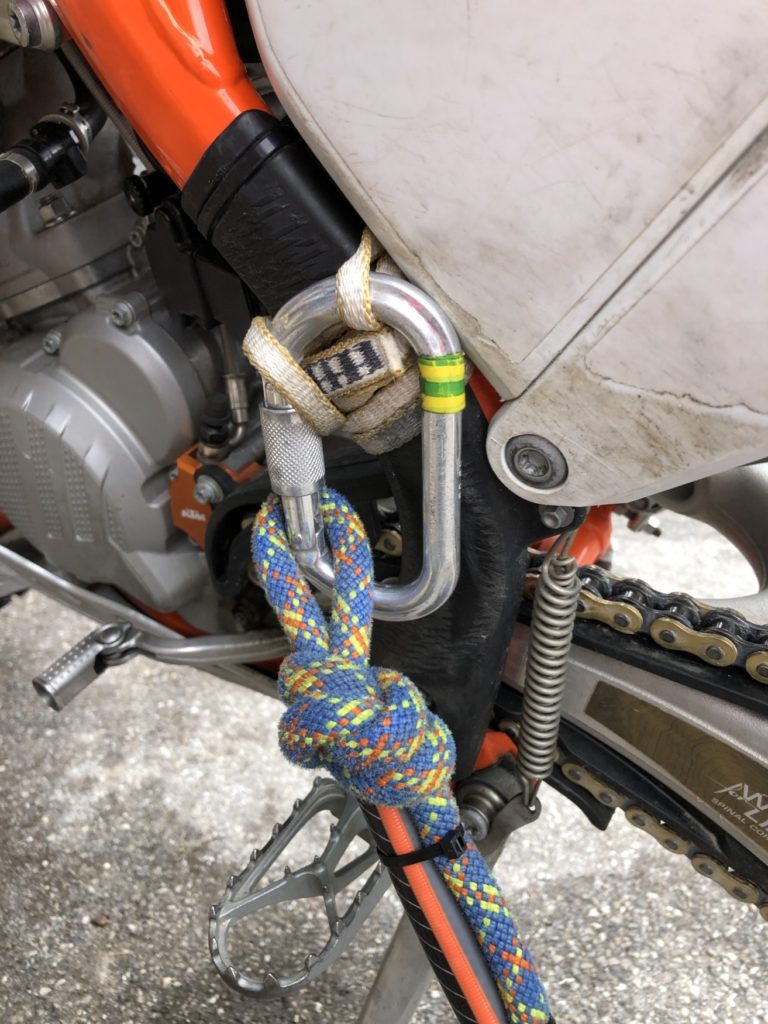 Rubber hose cable tied to rope at joining point helps prevent the rope going into the chain and wheel.

Once they are all settled the course safety guys step to the side and the engine note increases in anticipation. All eyes are on the start line rope. Someone pulls a lever and it flies up and clear. A roar of maxed out engines raises an instant white blizzard as rear tyres snake and spin searching for traction. Skiers tighten grips in anticipation of the coming lurch as they are momentarily obliterated from view by the flying snow. Traction is found, lines jerk taught, an avalanche of men and machines breaks free and tears on mass down the start straight. 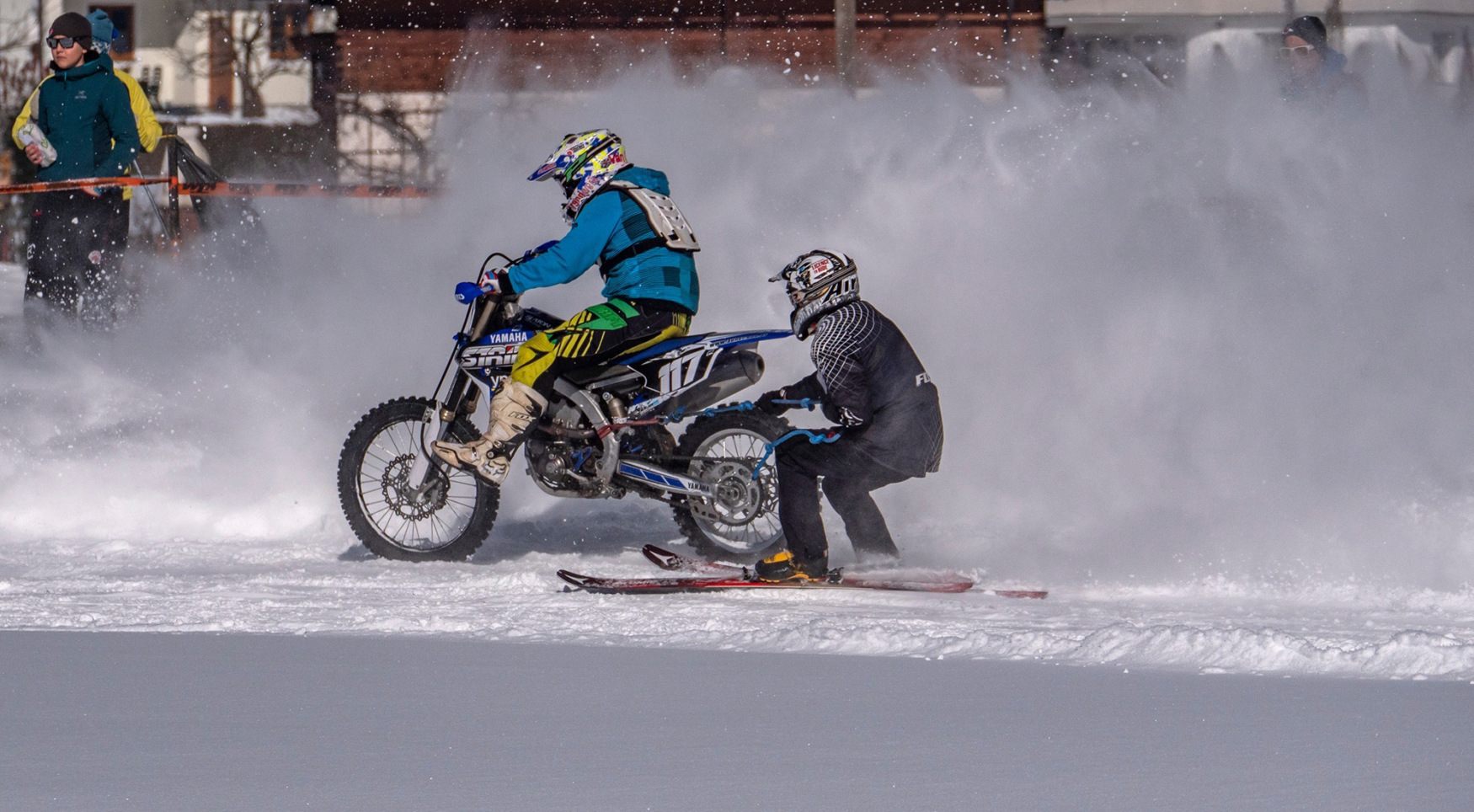 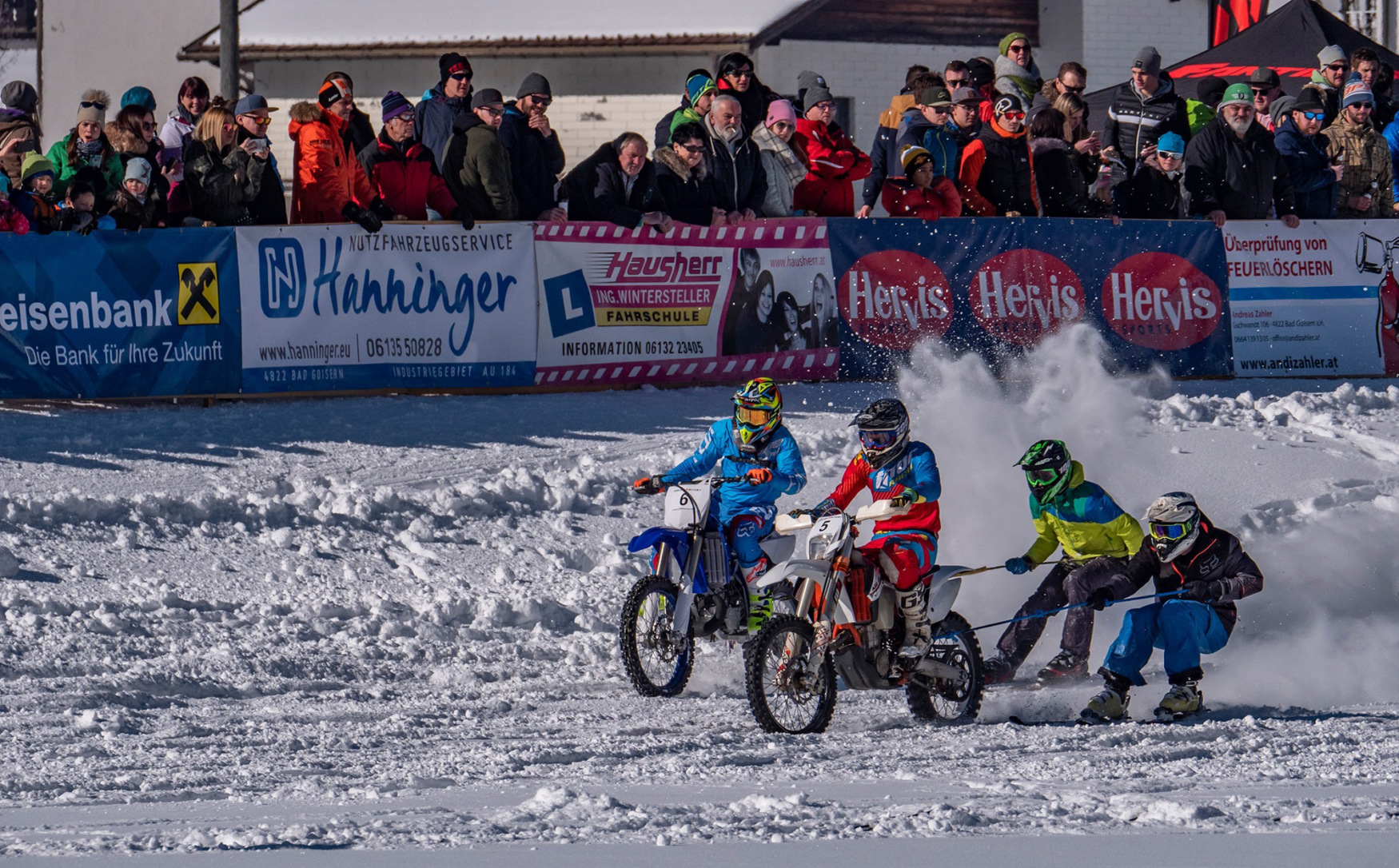 Initial fallers scatter left and right, picking themselves up and searching for dislodged skis as the cloud dissipates. Whichever team is in front after the first bend has a very good chance of staying there for the rest of the race. Enthusiasm and competitiveness is immense with the riders throttling their bikes around the corners with such abandon that the skiers are whipped around even faster and often end
up alongside or slightly ahead of the bikes, making it difficult to be sure who is really towing who. The skiers actually do a lot more than just hang on – it’s their job to do the breaking and stabilisation in the corners. 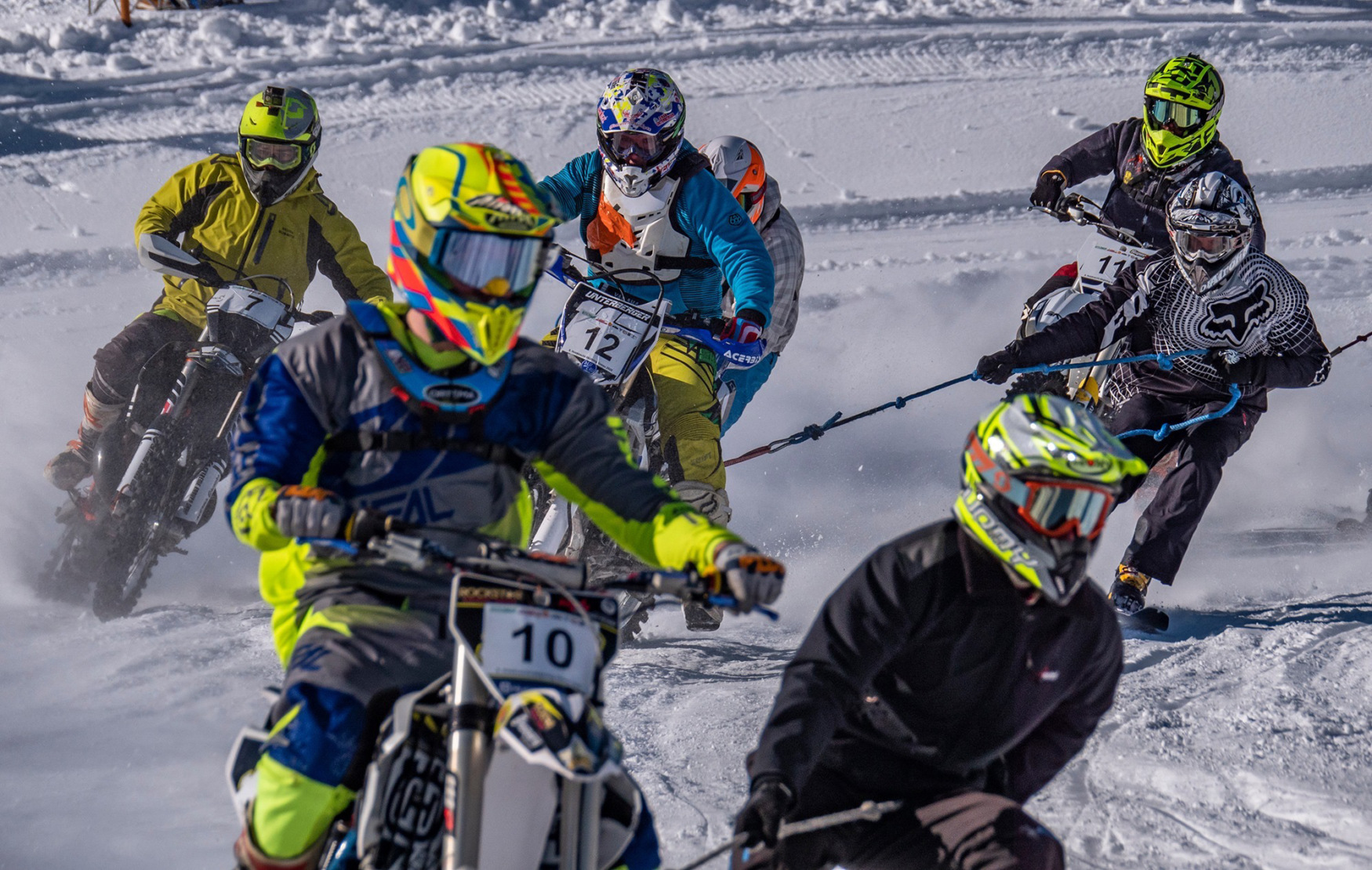 The skier actually helps to stabilize the bike in the corners

Crashes are the norm with bikes and skiers wiping out and parting company in huge clouds of snow. The fallers scramble frantically like Moto GP riders desperate to get back in the saddle as quickly as possible, all too often comically mistiming their re-entry into the fray causing an even worse multiple pile up. Amazingly, serious injuries are relatively rare and the worst casualty is usually the knotted rope when it gets inextricably wound around the rear wheel or cut to pieces in the chain. 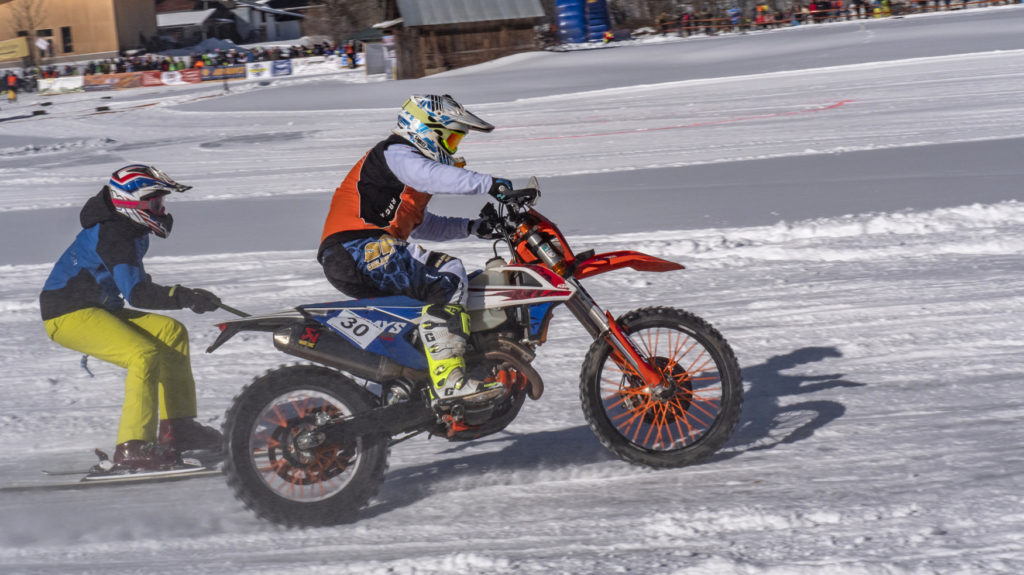 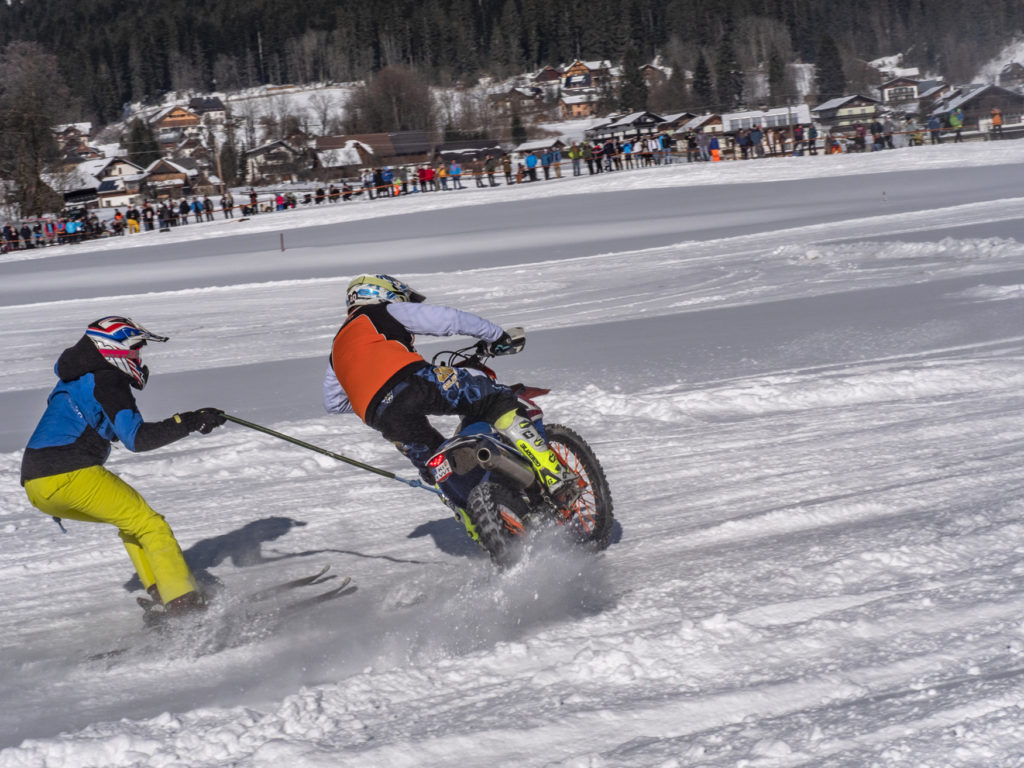 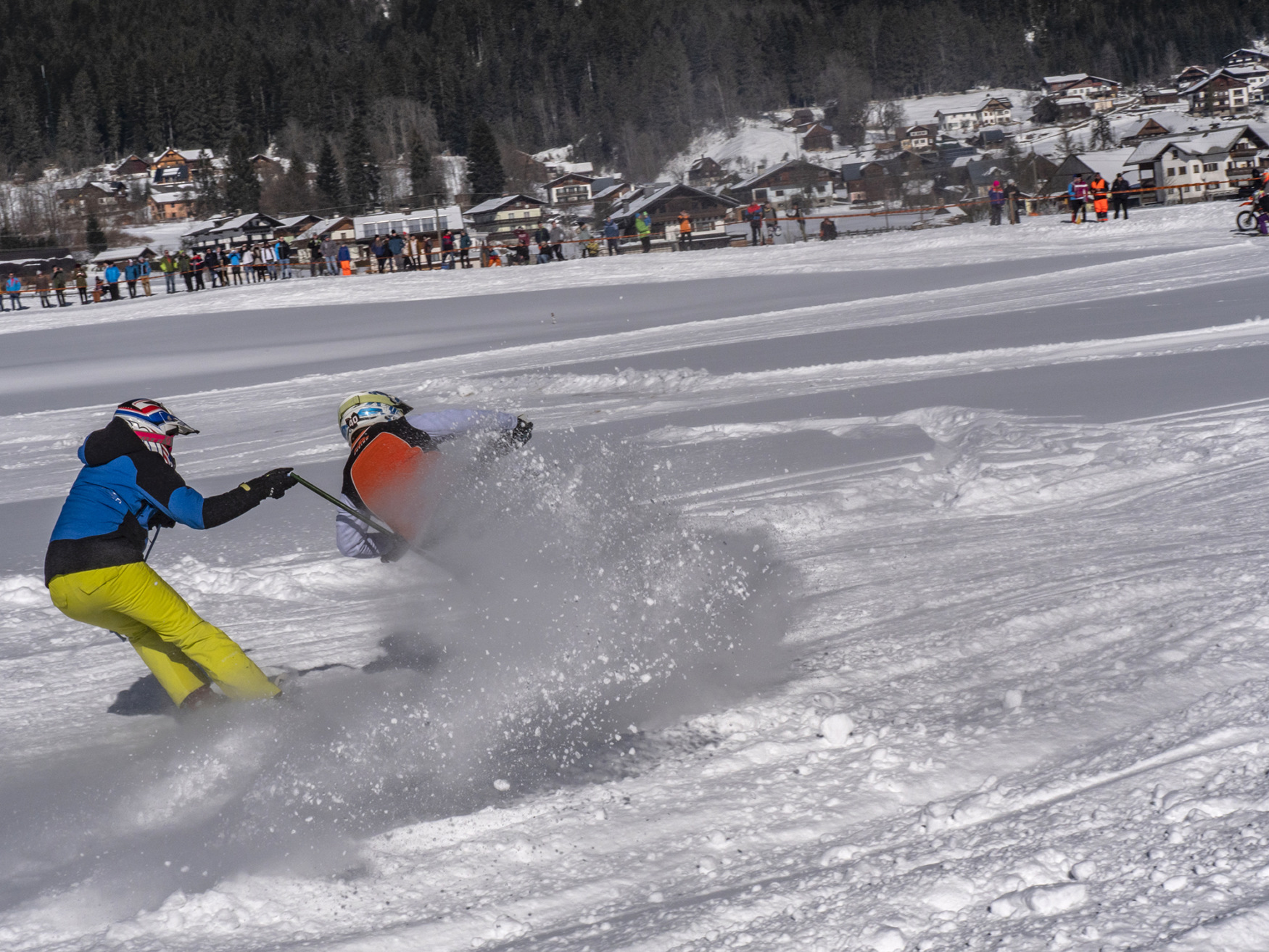 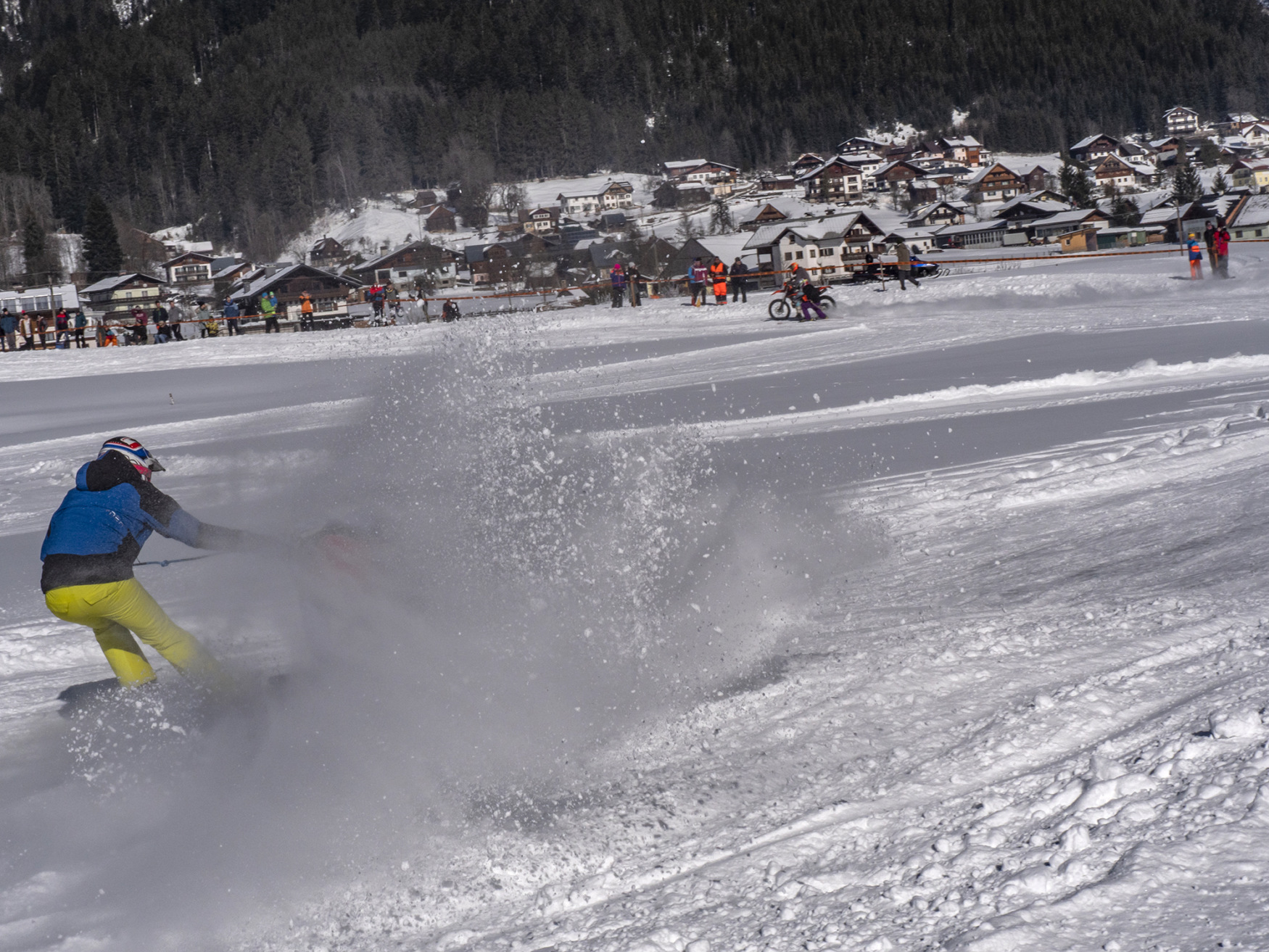 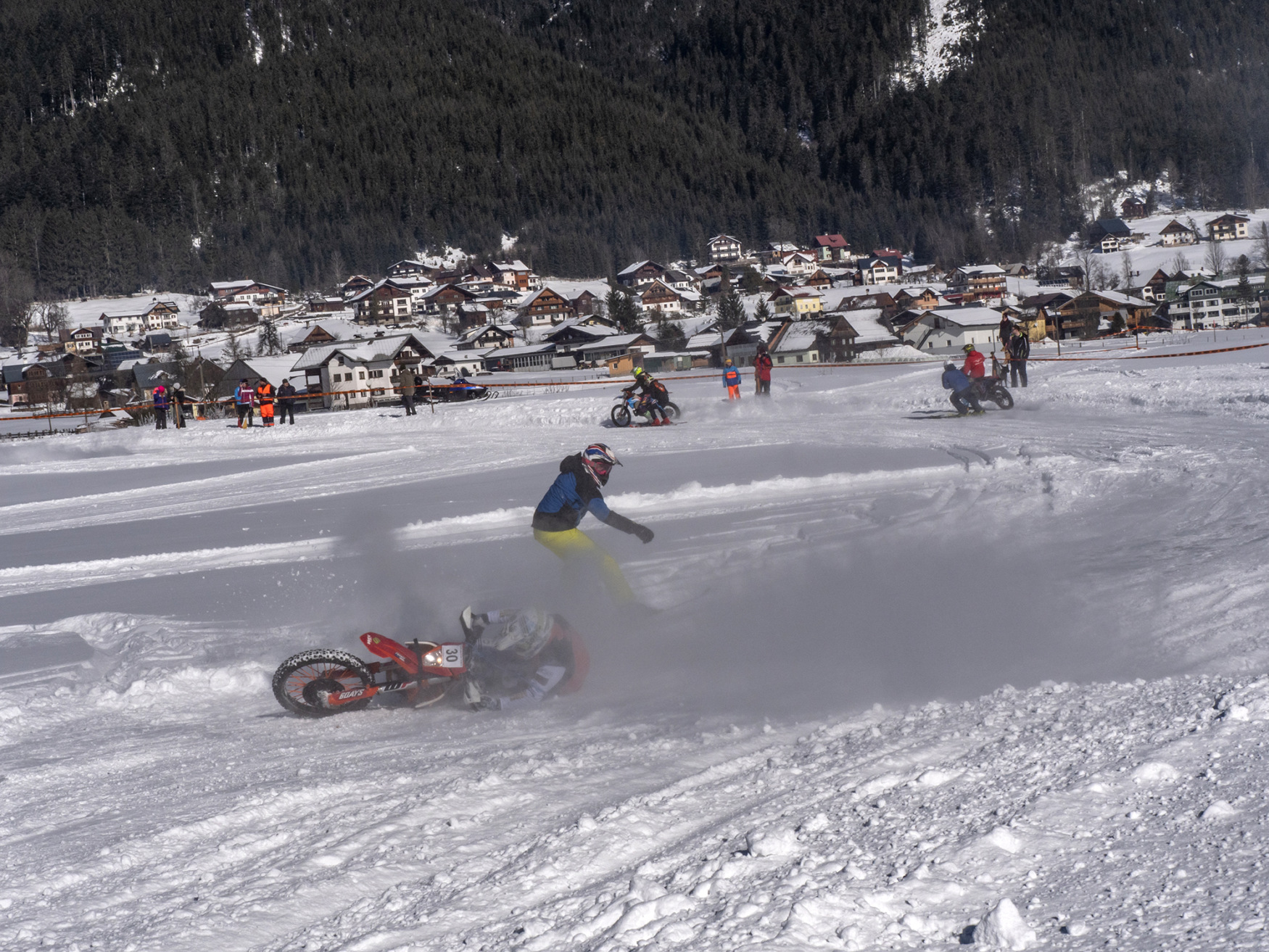 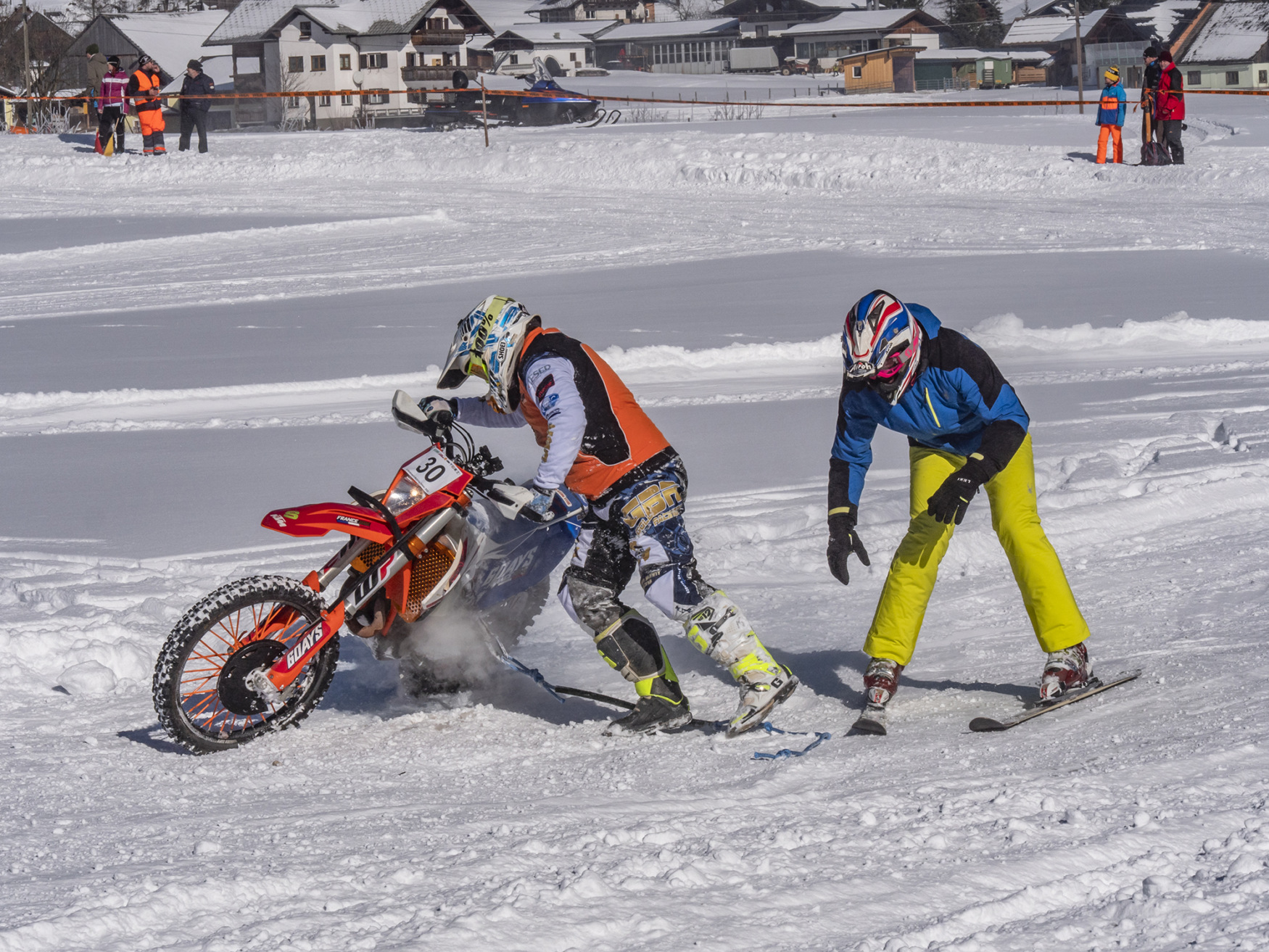 An old saying goes: ‘It’s not whether you win or lose – it’s how you play the game’ This event is a perfect example of that. I was enjoying the spectacle so much I can honestly say I never even noticed who won in the different heats. Frivolity is the real order of the day and, as this is also carnival season in Austria, many of the teams are decked out in fancy dress. One notable team competing in matching black and white furry cow onesies. 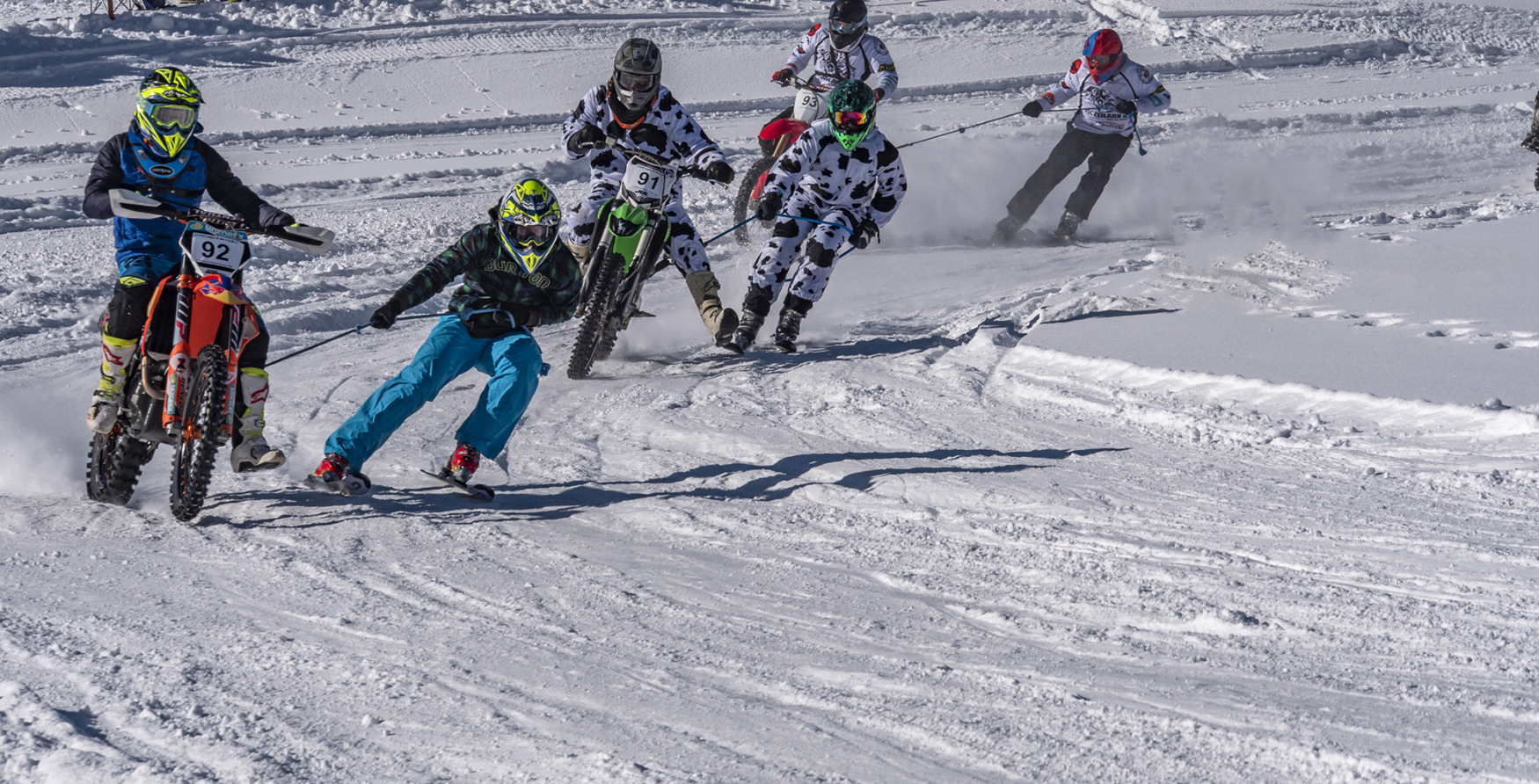 At 5pm, after an interlude of beer and sausage sandwiches, punctuated by parachutists from Red Bull descending from helicopters into the arena, the racing is over. Trophies and prizes are awarded to the winning pairs and after some celebrations peace descends once again on the Gosau valley. It will only take one good snowfall to erase all evidence that it happened at all.