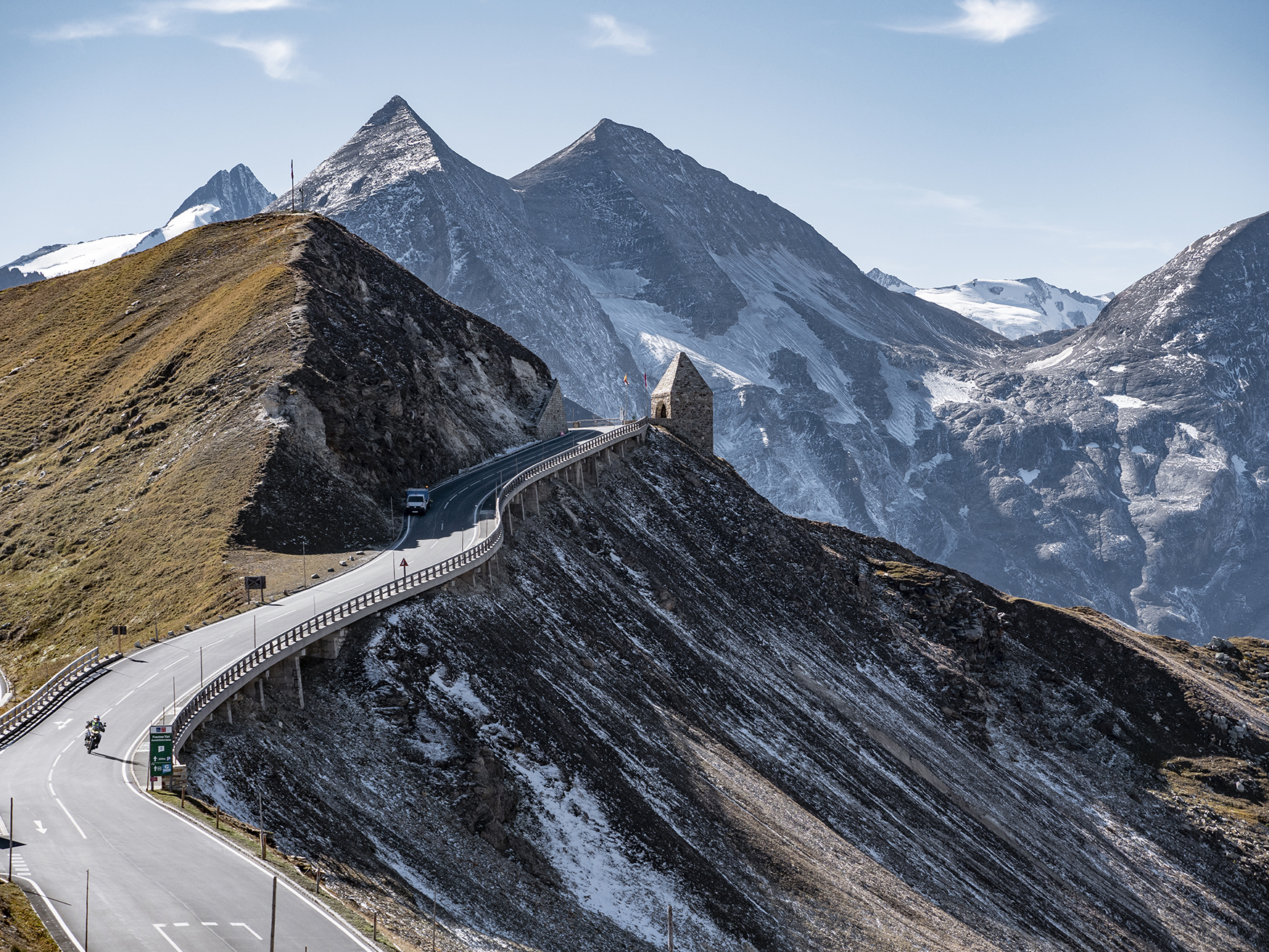 It was late in the season and we were on our way to ride the Grossglockner High Alpine Pass and visit the longest glacier in the Eastern Alps. A high wind weather warning was in effect for later in the day but we had committed to the trip now with a hotel booked in Heiligenblut on the other side of the pass.  We set off early in the morning with fingers crossed that we would make it over in time. The weather had been dull and overcast all along our one hour ride to get here from our base in the Salzkammergut region of Austria. As we finally approached the toll booths at Ferleiten just south of Zell am See on the Salzburg side of the pass the weather had changed and we emerged into bright sunlight from beneath the overhanging roof of cloud.  This was the middle of October and there was no-one queueing at the multiple toll booths which normally service long queues of vehicles in the peak season. 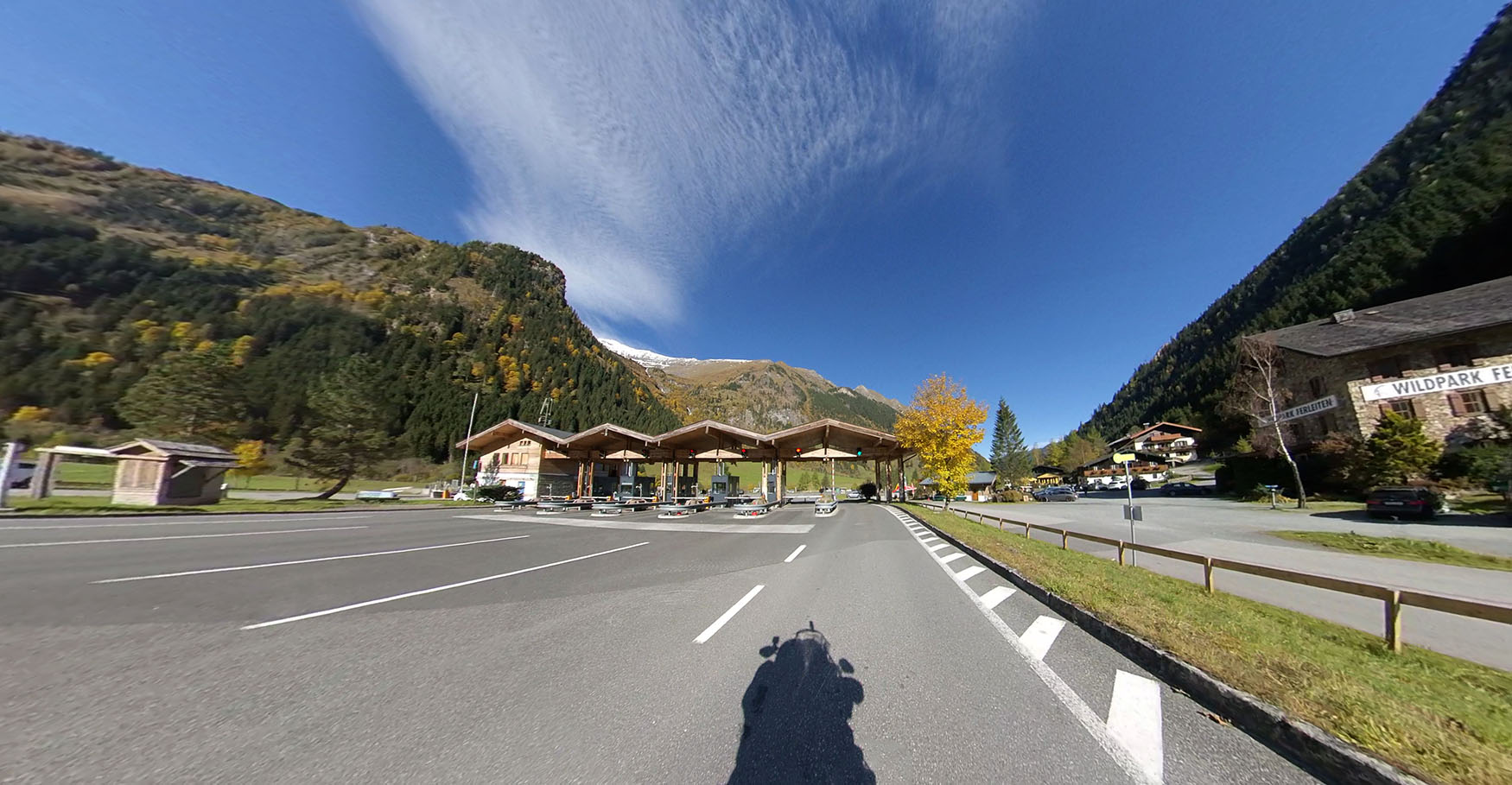 We paid our motorcycle day ticket fees of € 27 each and passed the barrier. The road ahead was clear, the autumn colors were beckoning and I stopped on the side of the road to quickly mount my onboard cameras before blasting off with a huge grin. This was going to be a really great ride! 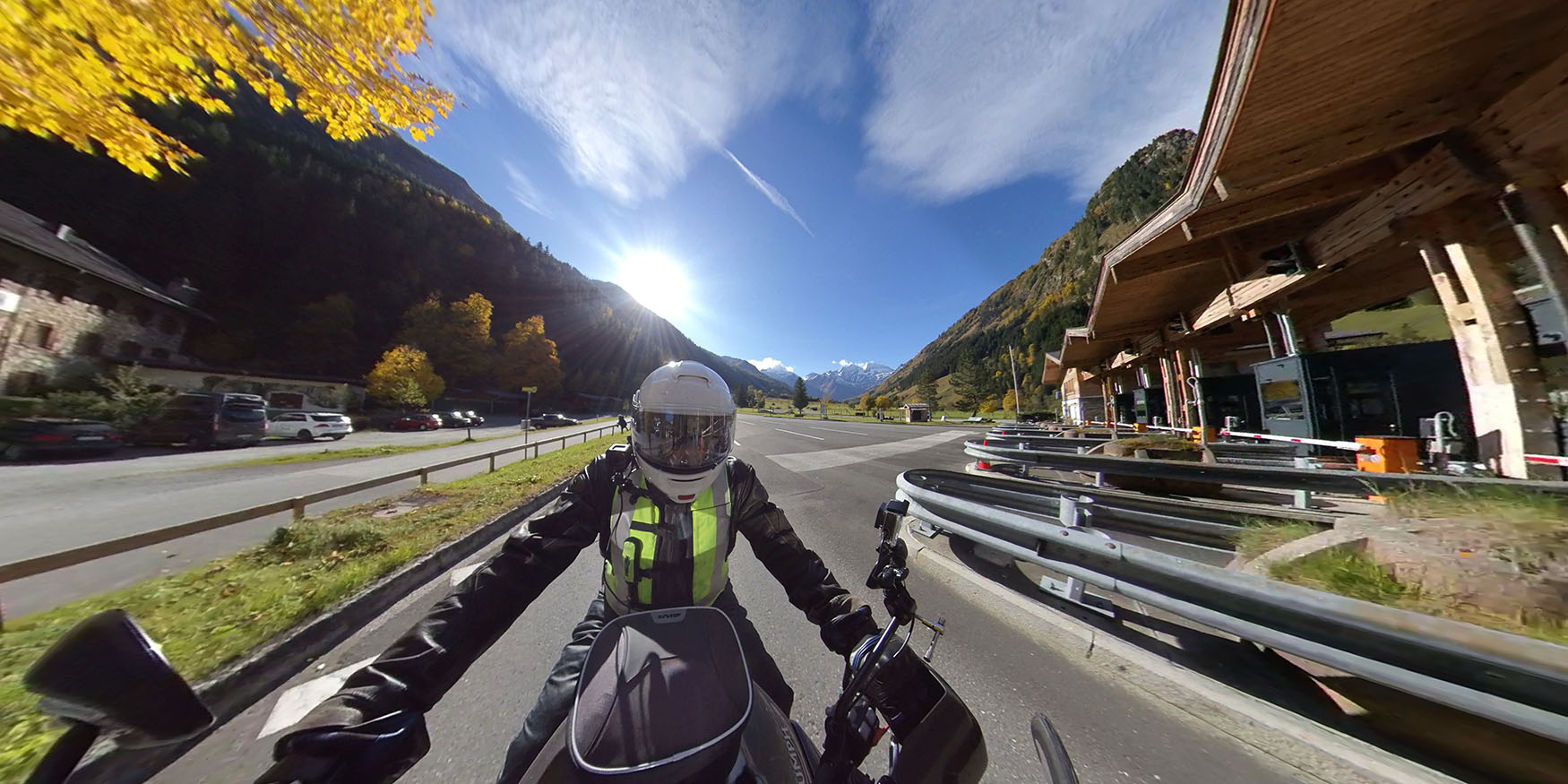 Humans have been crossing the Alps on a path that mainly follows the modern road for more than 3,500 years. Celts, Romans,  gold diggers and galley slaves used this strenuous and dangerous path, but not without praying to the gods for good weather and a safe journey at the apex of the route. The Grossglockner High Alpine Road leads from Fusch-Ferleiten in Salzburg to Heiligenblut in Carinthia. The high alpine road, which is fit for car, bus, motorbike and bicycle traffic, owes its origin to the road engineer Franz Wallack and Franz Rehrl, the forward-looking state governor of Salzburg. They were also the first to drive on the gravel road back in 1934 when it was yet to be completed. Ultimately, the Grossglockner High Alpine Road was inaugurated in summer of 1935. 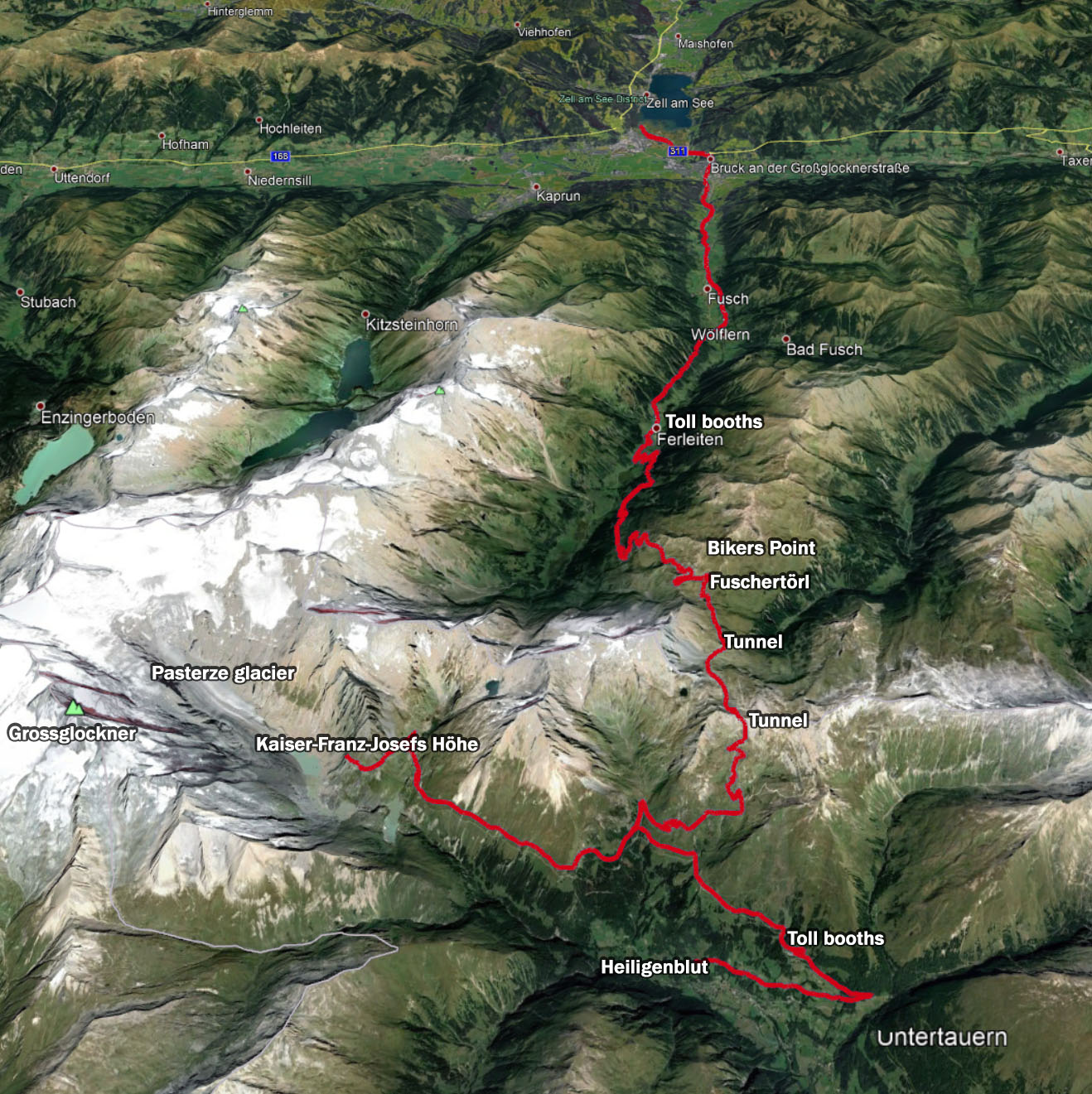 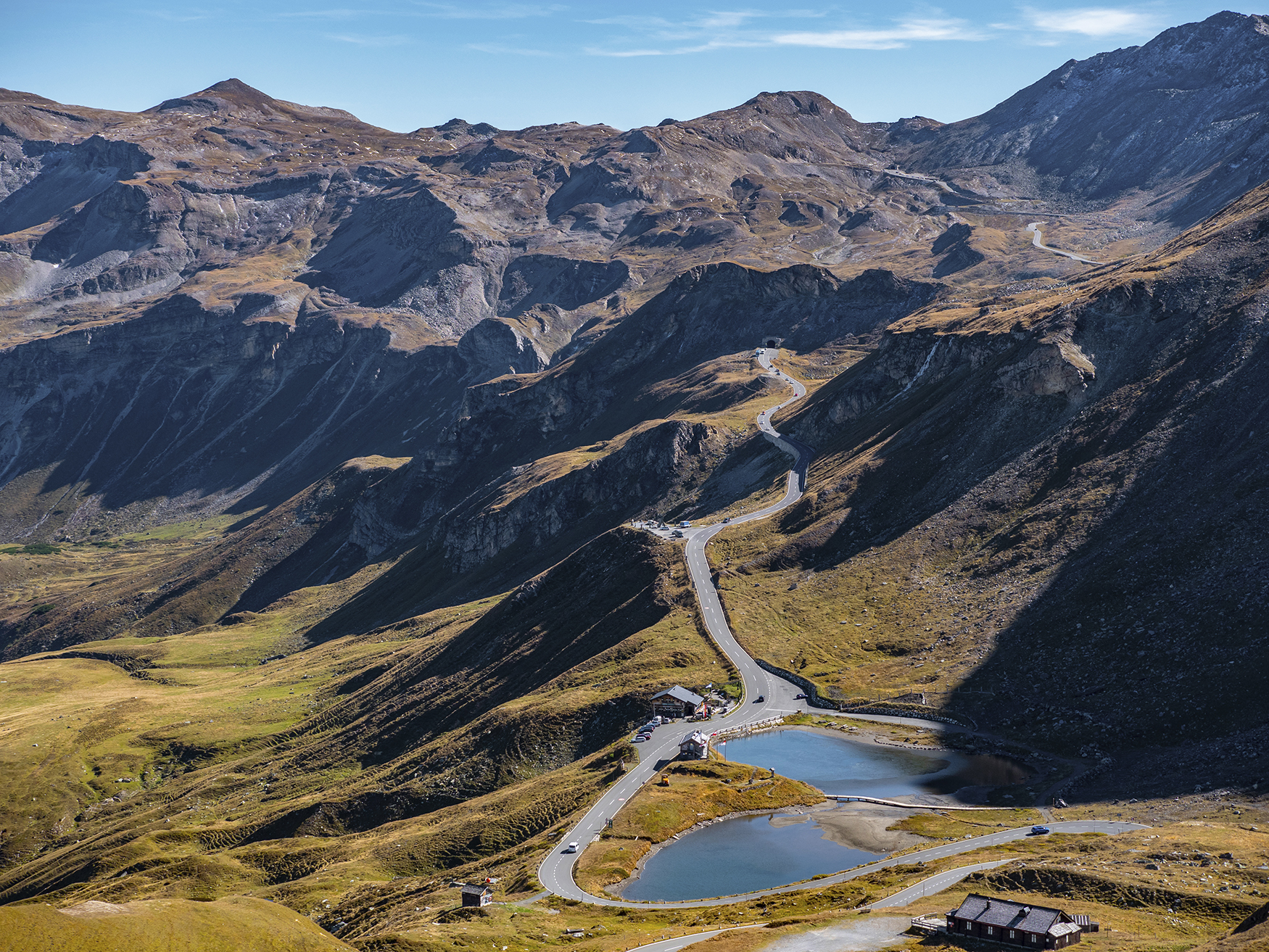 This 48 km long alpine pass is a snaking ribbon of near perfect tarmac with thirty six numbered hairpins, two high points and two tunnels. It has become somewhat of a Mecca for motorcyclists visiting Austria (as well as those of us who live there) and is undoubtedly one of the worlds greatest motorcycling roads.

In common with all roads with such a reputation it is imperative to ride it very early, very late or off-season (preferably a mix of the two) in order to really put it through its paces unhindered by those pesky four-wheeled obstacles that are otherwise liberally scattered along the route. The length of the season is dictated by the snow and you can never be sure when it will actually open in the spring, but its normally sometime in May. In the few weeks prior to the opening some 550,000 cubic meters of snow,  enough to fill a football stadium to a height of 50 meters, are cleared away by huge specialized rotary ploughs. It’s a monumental task. Once open, it usually stays open until sometime in November – again the exact date is dictated by the snowfall.

So far we had felt none of the days threatened wind and only an alien looking creamy foehn cloud above us gave any hint of serious weather on the way. 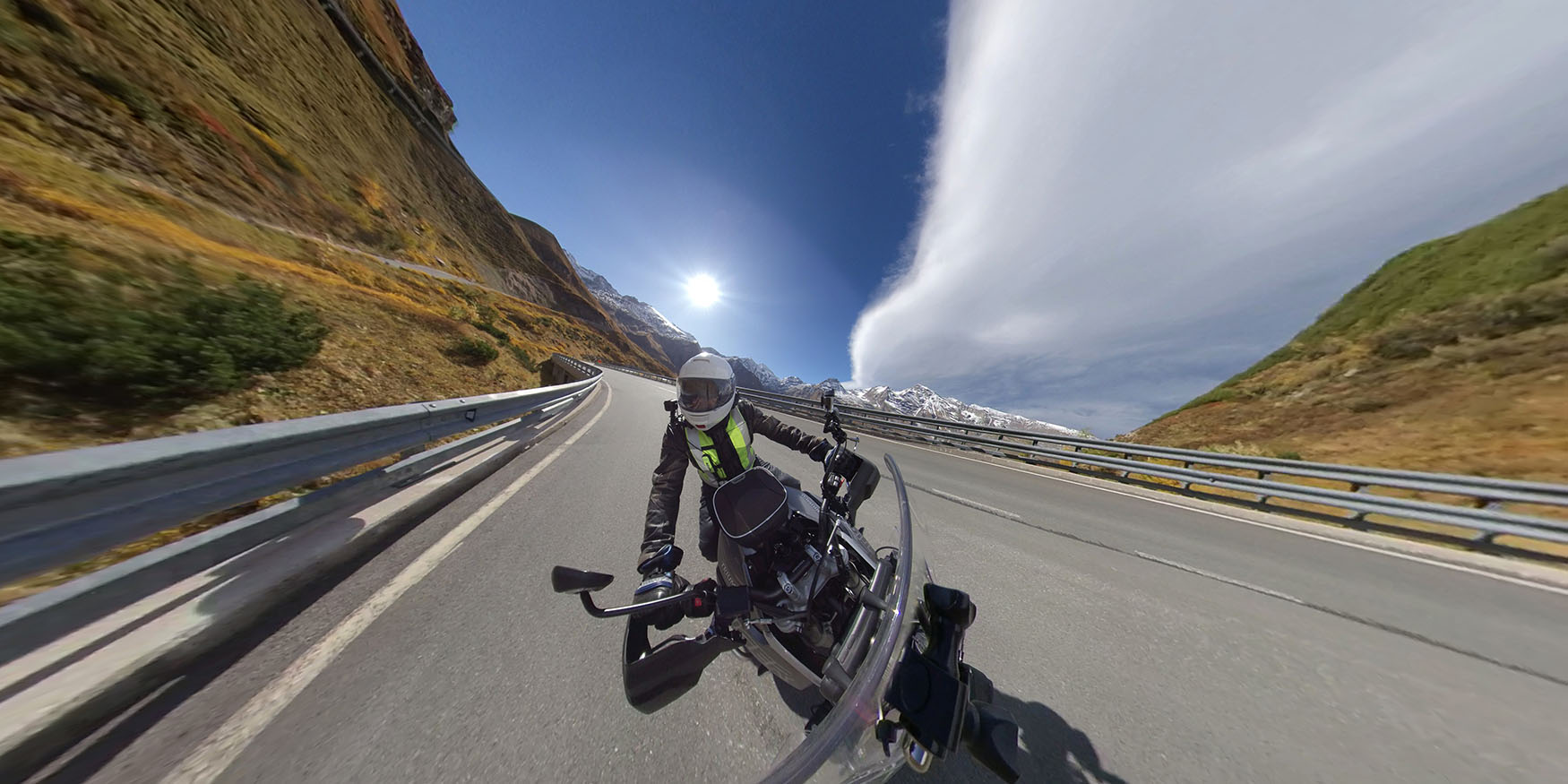 The reds and oranges and browns and greens of autumn were alternately back and front lit as we threaded an unimpeded flowing line through hairpins, straights and bends.  The only other traffic we saw that day was a pair of intrepid, and super fit, cyclists sweating there way valiantly to the top. Motorcycling really doesn’t get any better than this. 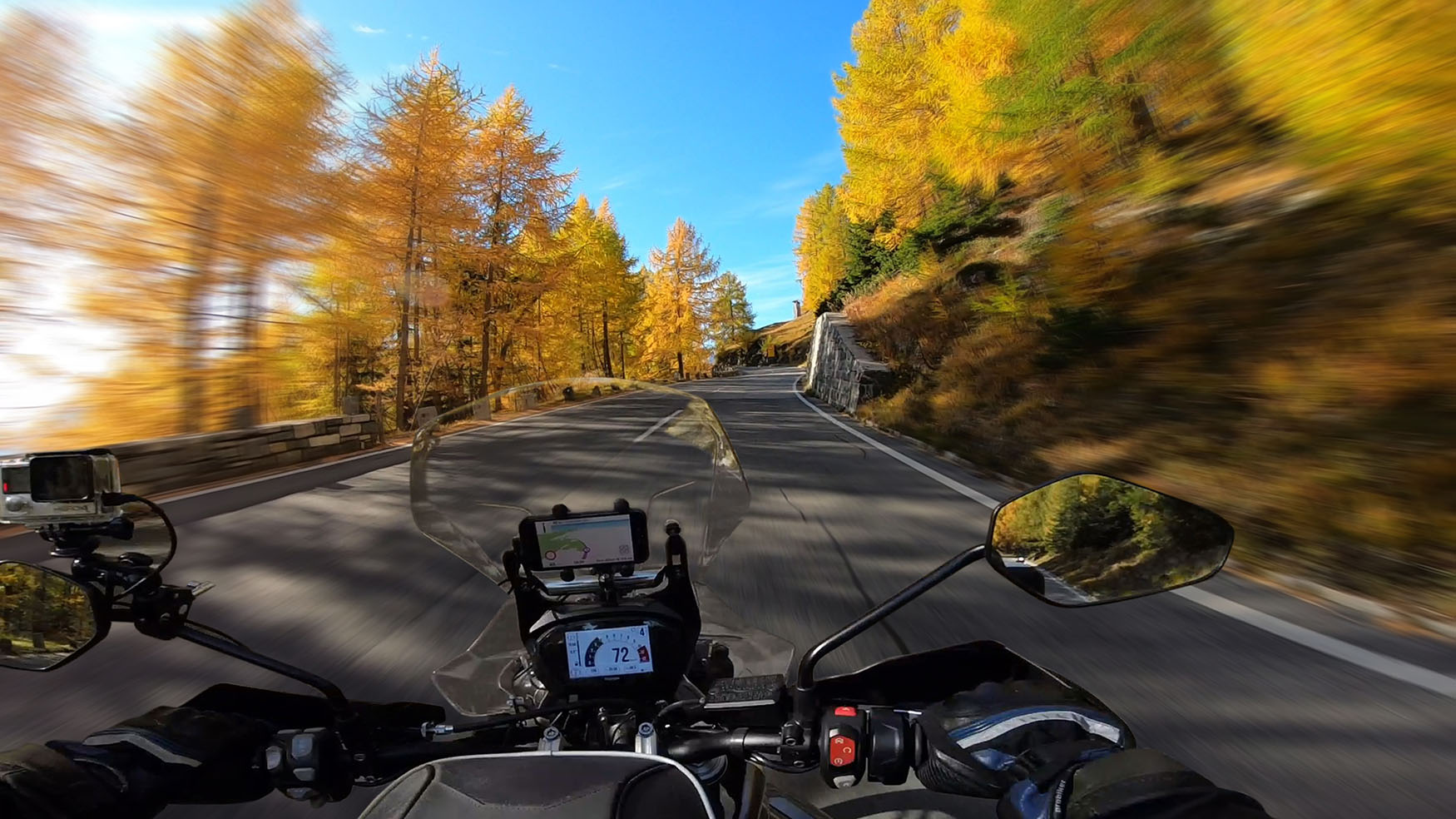 As a reminder and an aid to those riders who tend to take left handers too close to the centre line, some bends have a series of white circles painted on the road suggesting a safe line that will keep riders heads clear of the oncoming traffic. These aids are becoming increasingly common on Austrias more popular biking roads in an effort to reduce accident statistics.

As we rapidly climbed ever higher the trees soon disappeared and we were left with browning green vegetation dotted with the reds and yellows of small shrubs against an approaching backdrop of jagged snowy peaks. The sides of the road next to the precipitous drops, switching from the left to the right with each hairpin, are lined with spaced out rows of stubby stone blocks that would only serve to catapult you over the edge should you hit them.  At 2,450 meters we arrived at the first highpoint and a welcome coffee stop at the Fuschertörl restaurant. Were were lucky – it was its last day open for the season and would be closed from the next day for the remains of the winter. 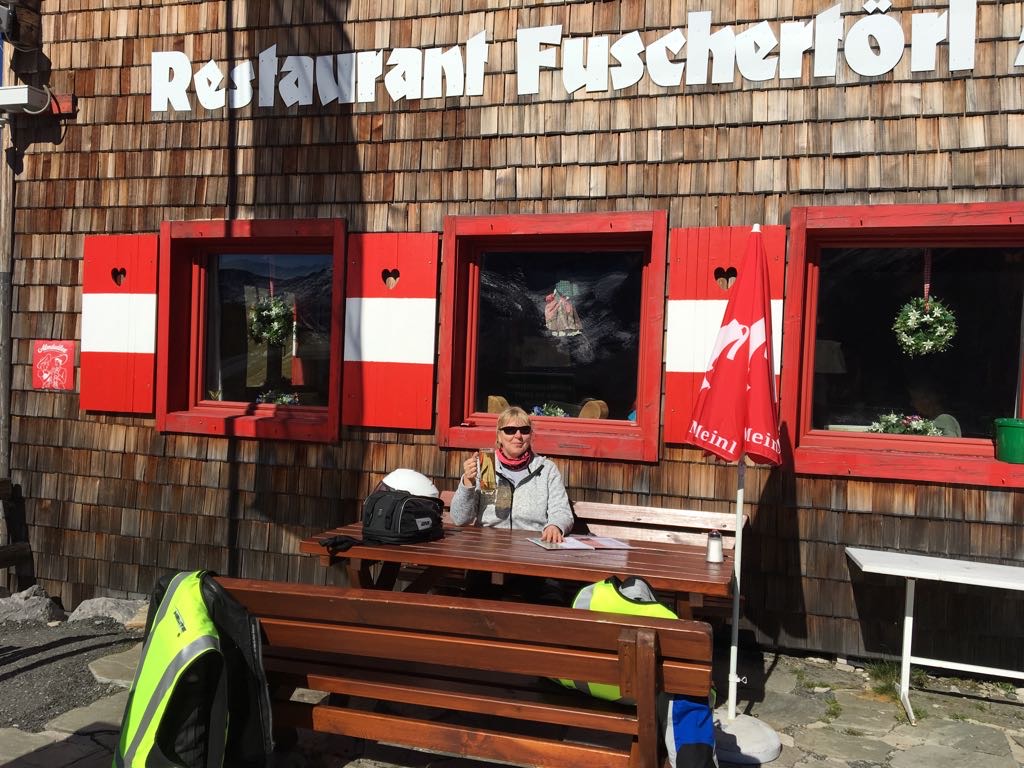 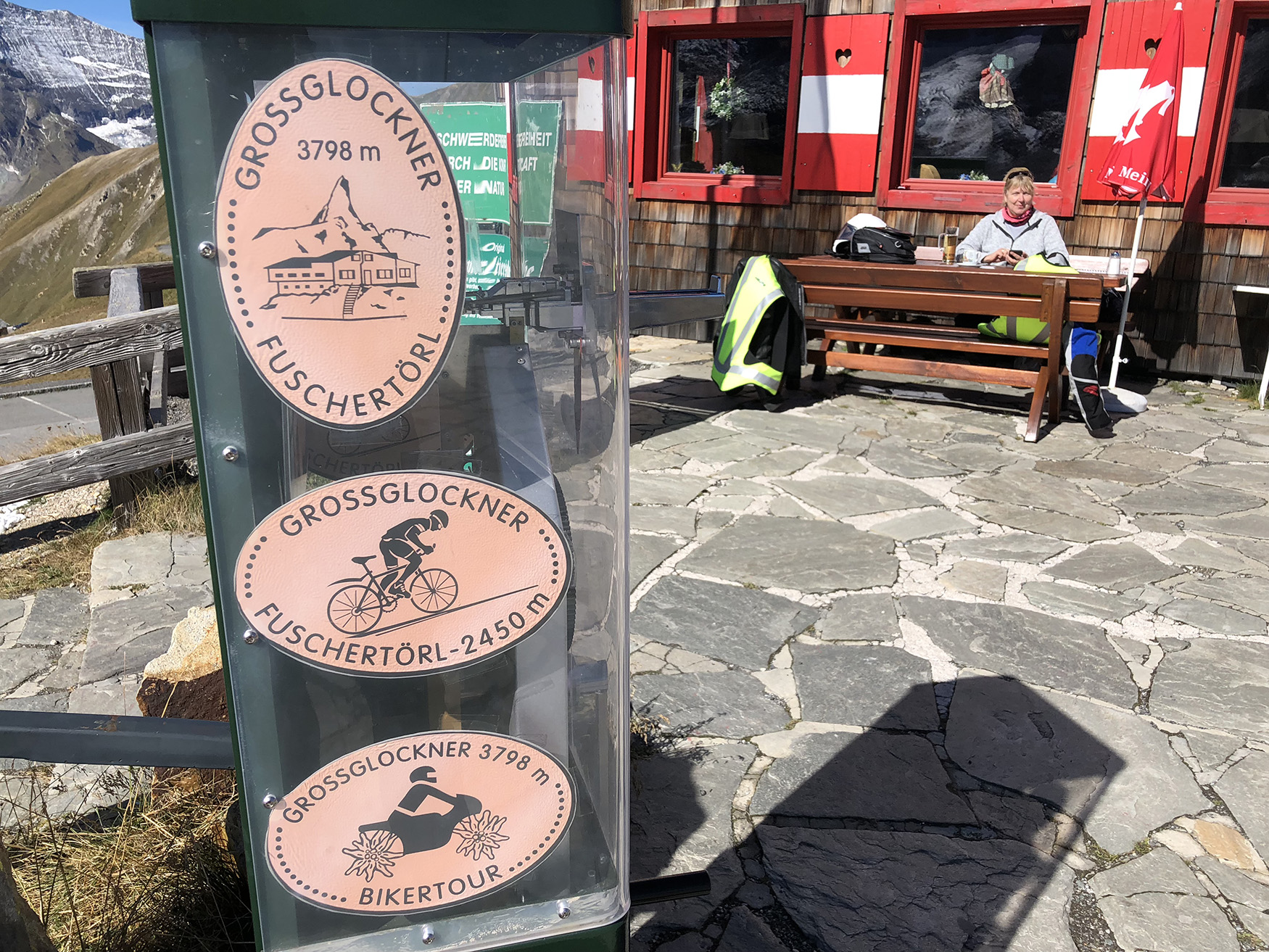 After easily succumbing to the lure of a shared slice of Apfelstrudel with our coffees we mounted up again and rode up the narrow switch-back cobbled road (not recommended in the rain) to the Edelweiss Spitze, affectionately known as ‘Bikers Point’ , which at 2,571 meters is actually the highest point on the pass. 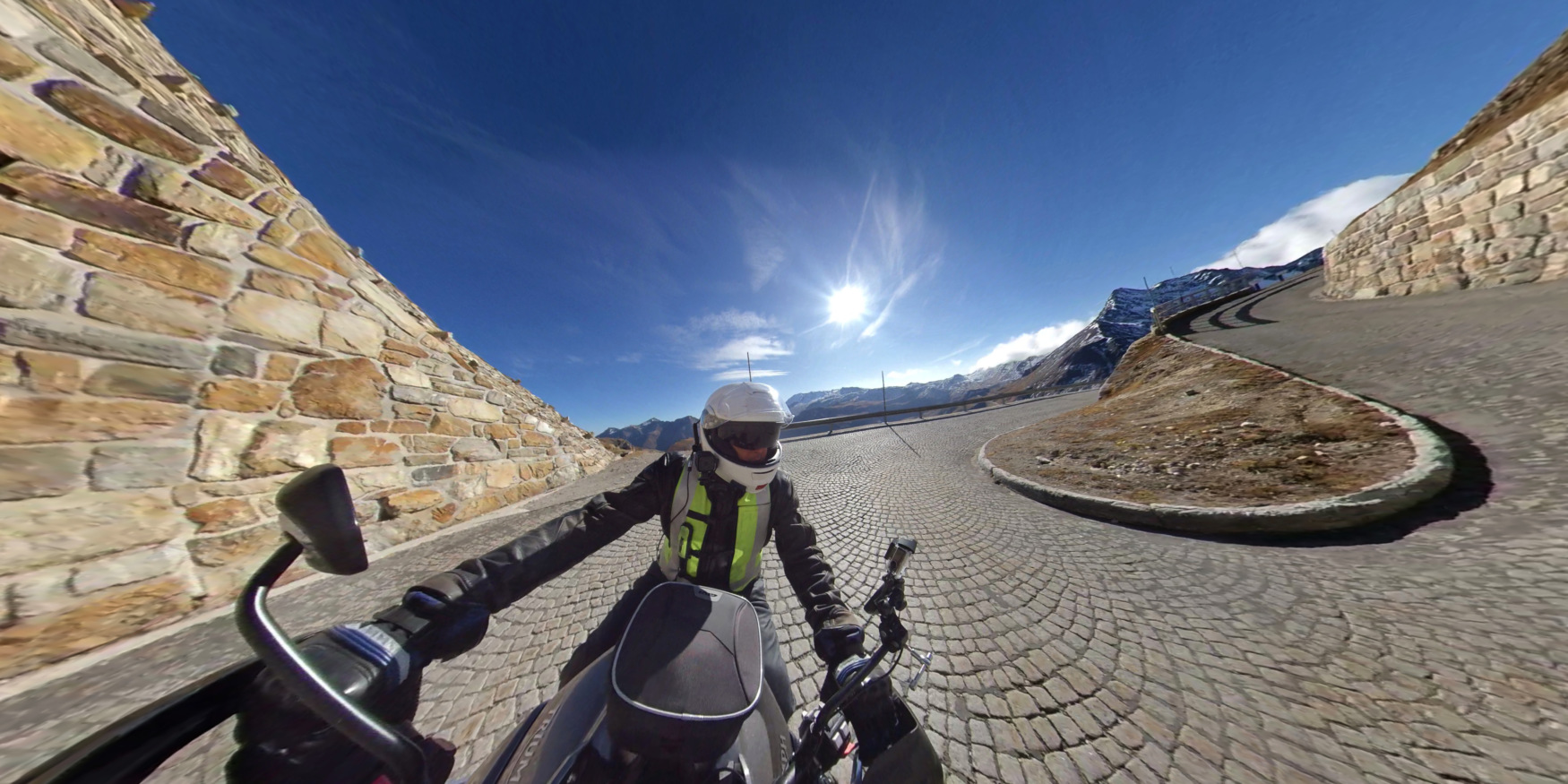 The wind was threatening and workers were already battening down the solar panels on the roof of the Edelweisshütte restaurant in preparation for the coming storm and for the winter. We decided not to hang around for too long. A few photos posing with the altitude sign and we were off. 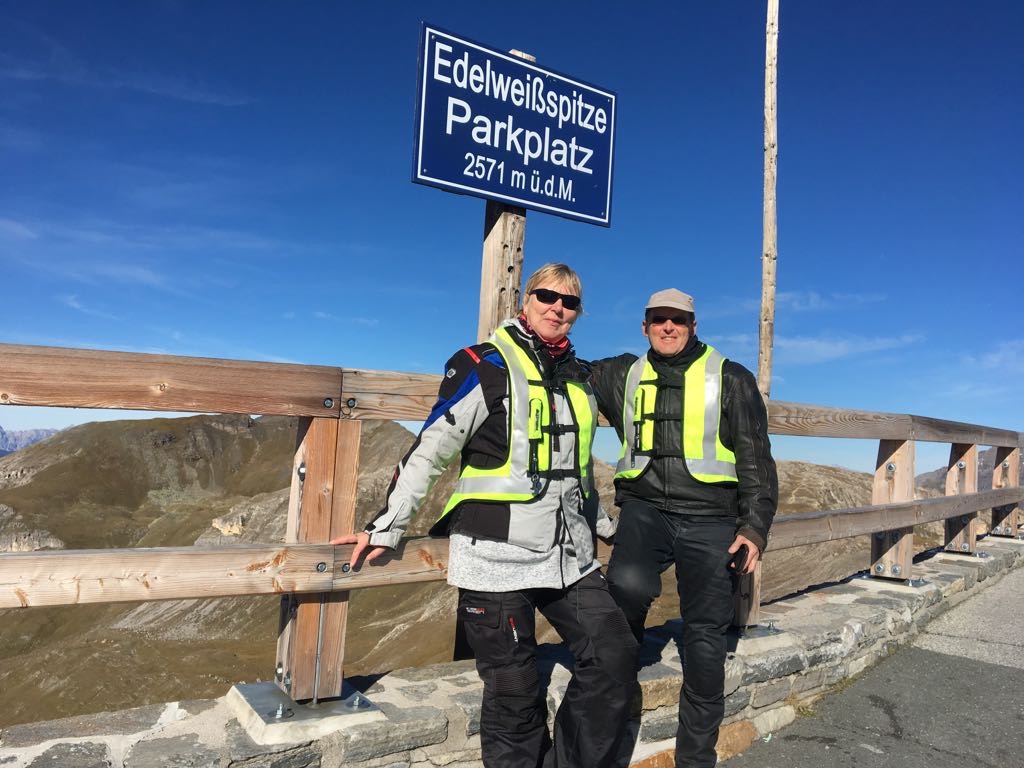 We were truly above the snow-line now and that alien spacecraft of a cloud was spanning the entire visible sky behind and seemed to be chasing us across the high plateau as we made our way to the two short brick-lined tunnels that would lead us from Salzburg to Carinthia and the start of the descent.

These tunnels can be very treacherous, they are not well lit, the road surface is less than perfect and the tunnel walls are often lined with curtains of dripping ice, but at this end of the season they were clear. 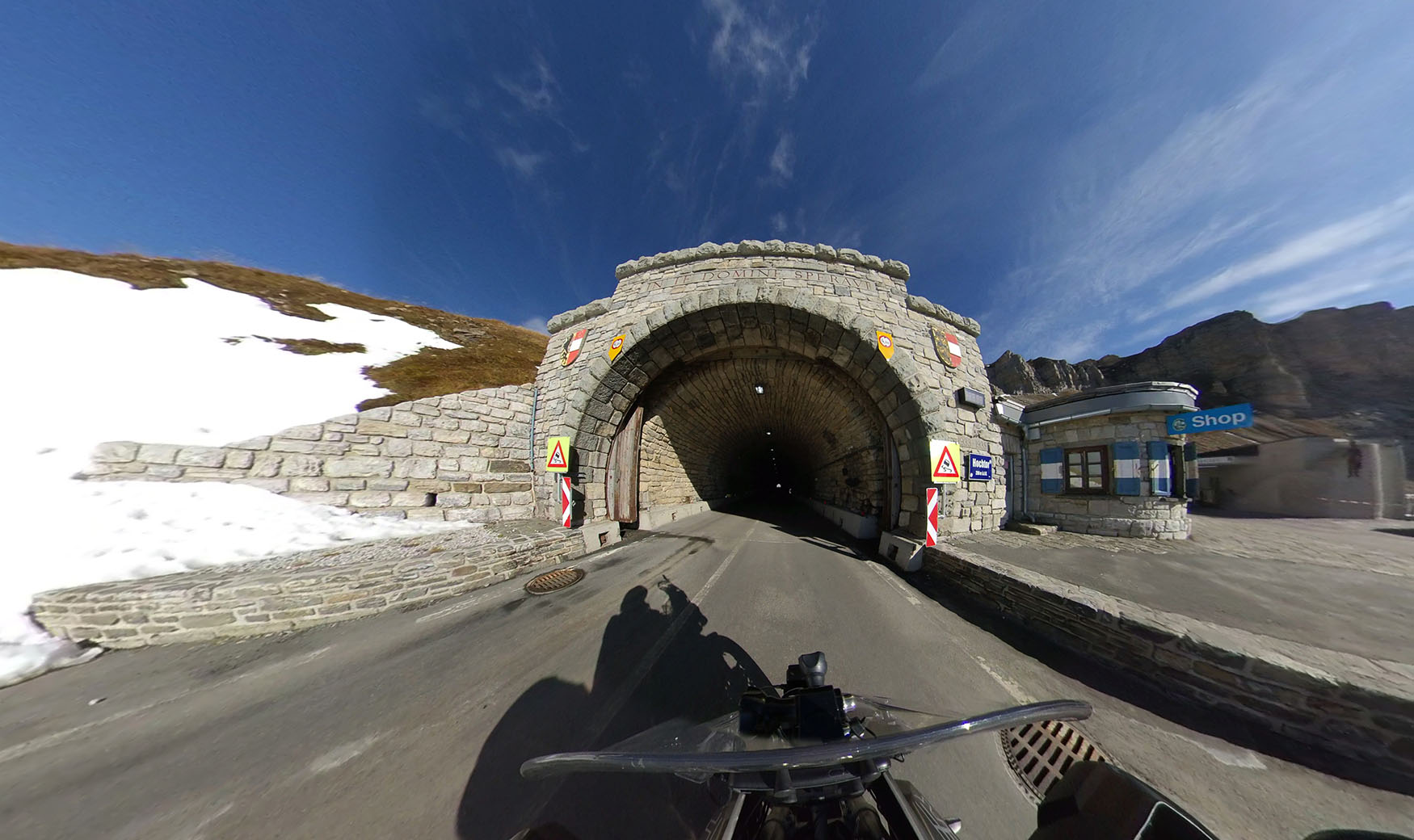 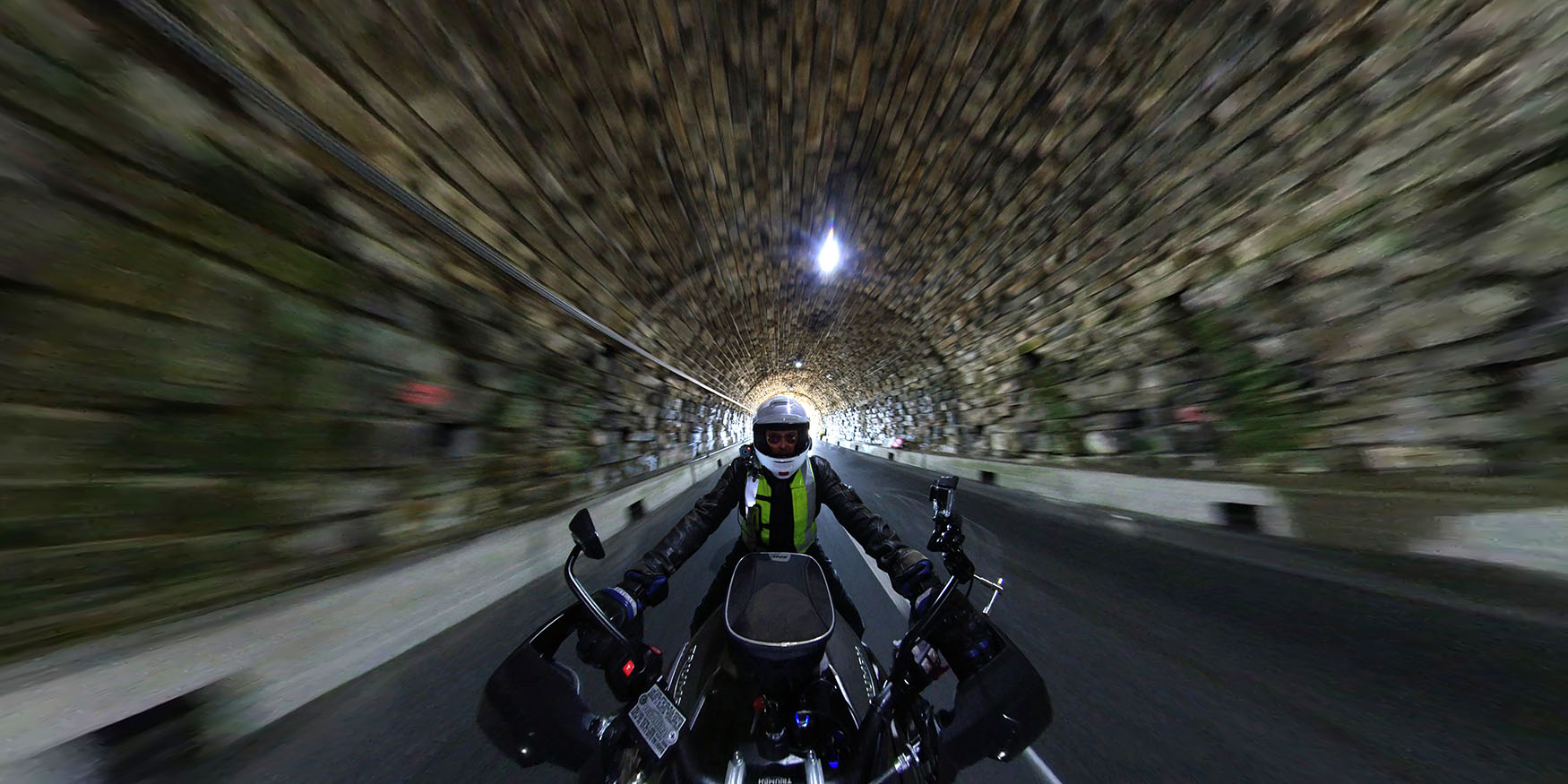 Our descent down towards Heiligenblut and the eventual end of our ride for the day was a wonderful rewind of all the fun we’d had on the way up, but there was still one major attraction in store for us. As we descended down from the snowy barren high point into the forested zone below a sign at a small roundabout pointed us towards the Kaiser-Franz-Josefs Höhe and the Pasterze glacier.

This side road excursion is a microcosm of all that went before. It has its own zones of changing vegetation, its own numbered hairpins and equally stunning, dare I say often better, views as it winds along the right hand side of the valley up towards the glacier. 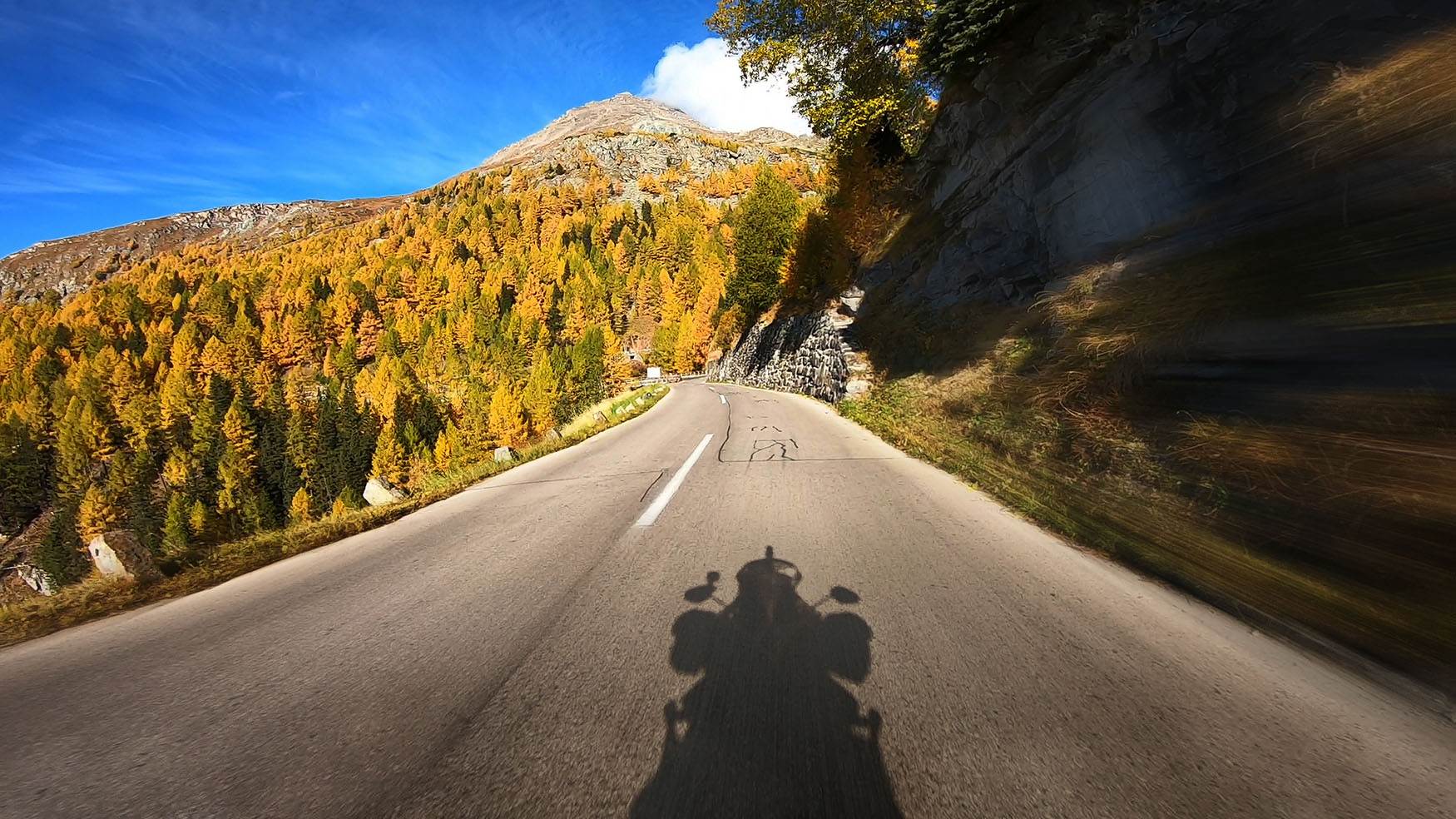 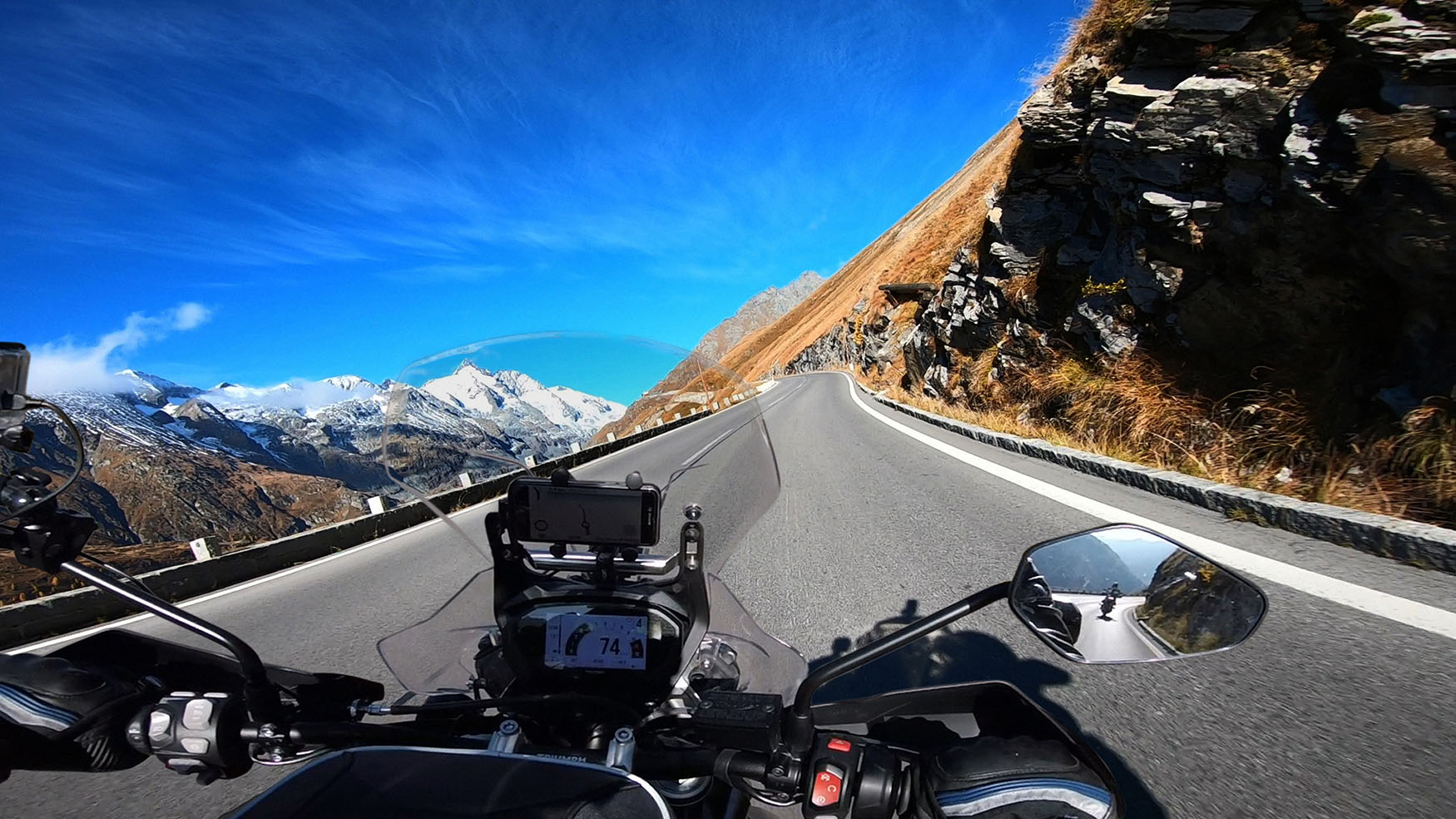 Just before it gets there it passes through a long concrete roofed and columned terrace clinging to the wall of the valley and protecting the road from snow and rock fall. With the low autumnal light it made for a stroboscopic entry to the view that smacked us in the face as we turned the final bend. 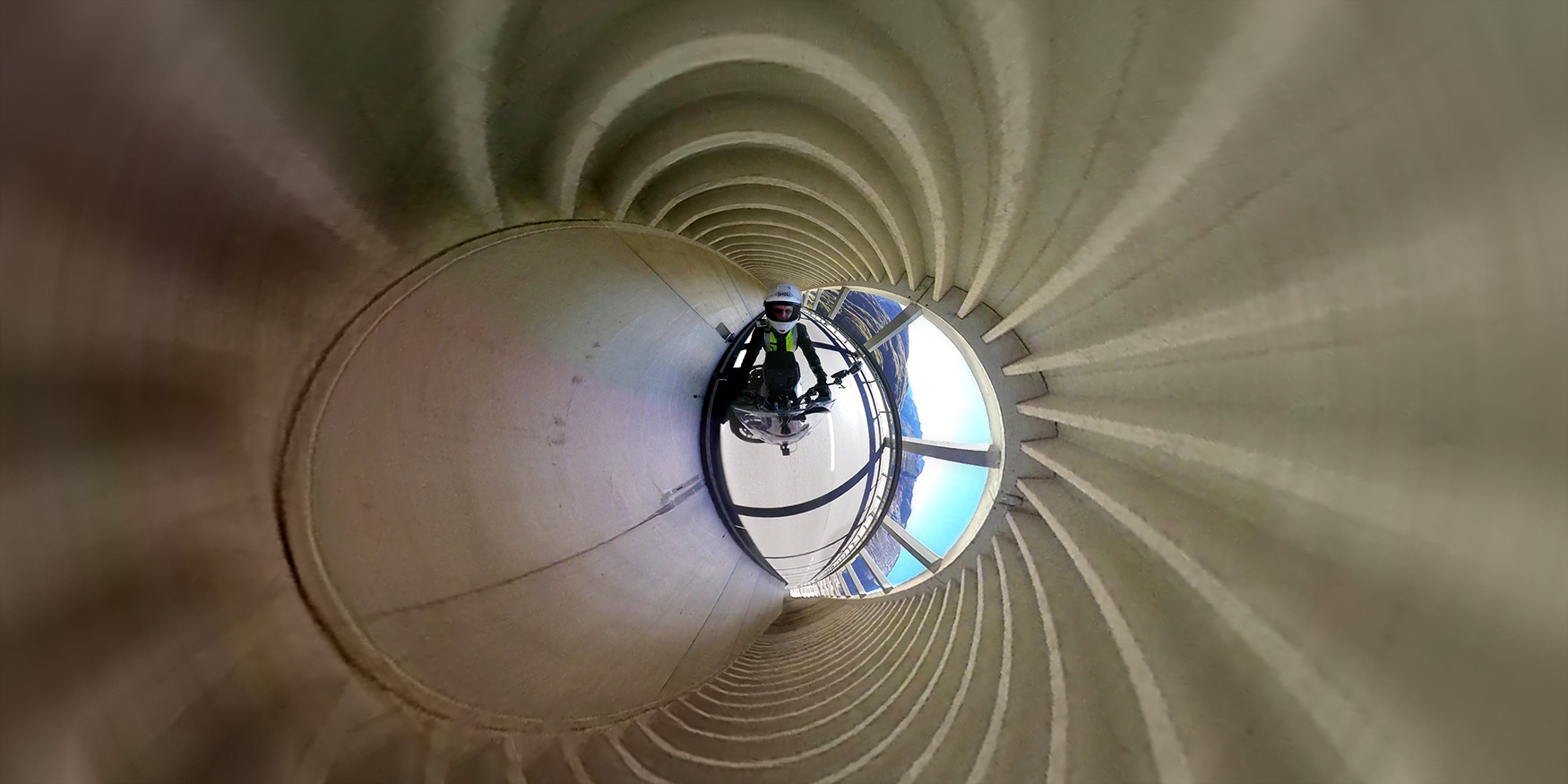 We had arrived at the Pasterze glacier, the longest in Austria and the Eastern Alps, stretching some 5.2 miles in length and covering an area of around 8 square miles. The road terminates on a viewing platform directly above the foot of the glacier and about 1,500 meters below the majestic snowy peak of Grossglockner itself.  This place, at 2,369 meters high, is known as the Franz Josefs Höhe (high point), and is named after the last Kaiser of Austria. 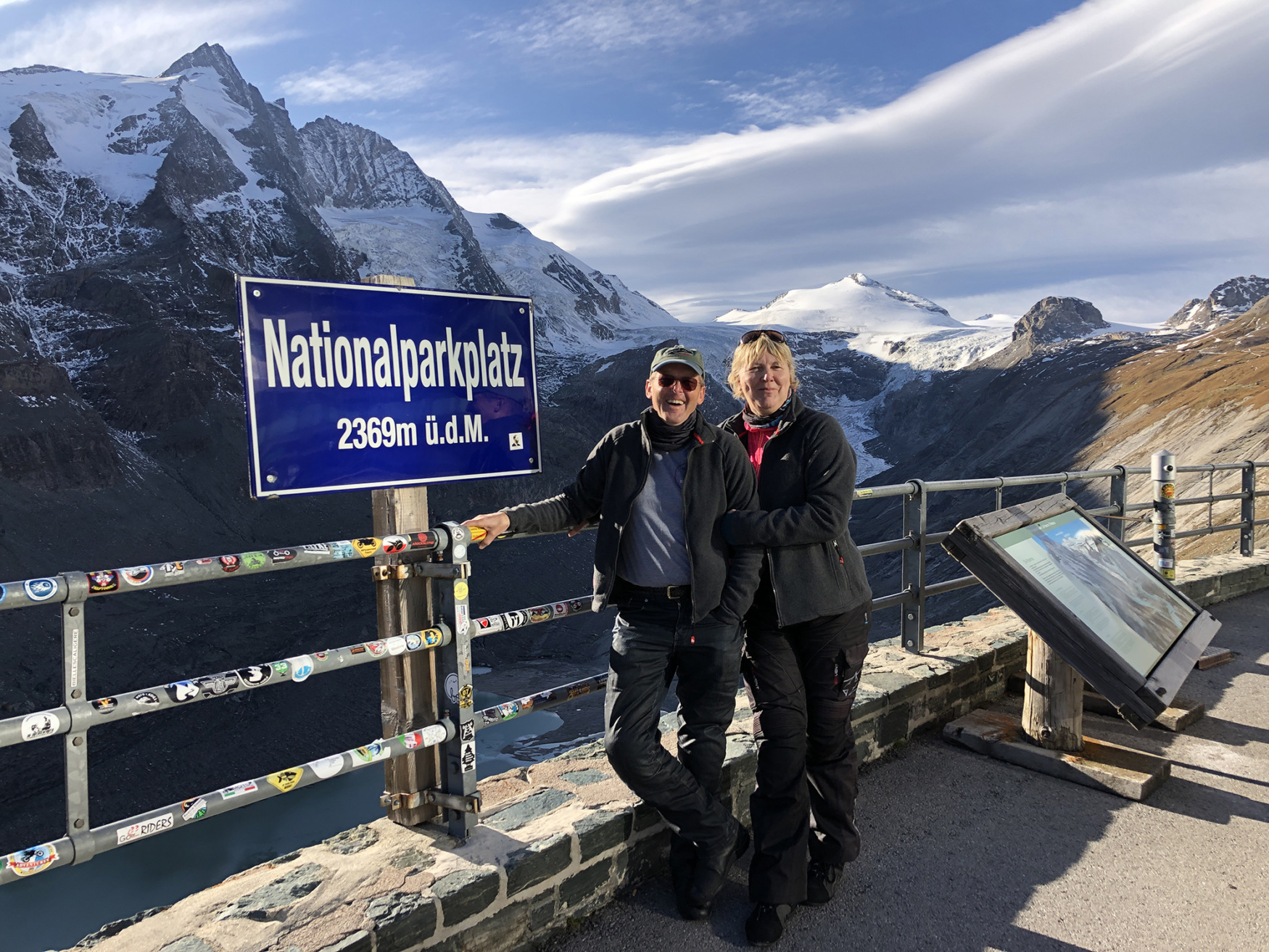 From up here at various times of the year it is possible to see Golden Eagles and occasional Vultures soaring high in the air above. For those who like to hike off the beaten track it is also possible to see Ibex, Chamois and Marmots.

The large car park and the whole viewing area, jam packed with tourists in peak season, was completely deserted. We had no need of the free locker space provided for riders belongings. We could safely leave all our stuff on the bikes and wander around alone. It was all for us. Truly a dream ride!